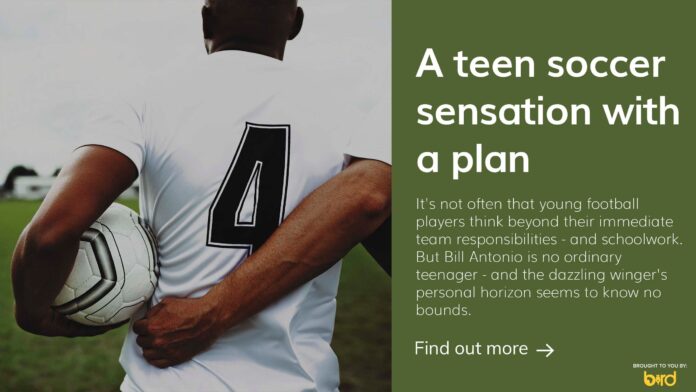 It’s not often that young football players think beyond their immediate team responsibilities – and schoolwork. But Bill Antonio is no ordinary teenager – and the dazzling winger’s personal horizon seems to know no bounds.

It is a day like any other in Harare and, as it is customary, the Glamour Boys, a moniker for the Dynamos Football Club (DFC), are on the pitch for their daily training session. As the team goes through intense dribbling, sprinting, and defensive paces, there is one stand-out member of the squad — the youngest in its ranks.

Coach Tonderai Ndiraya, renowned for his disciplined approach to the game, is keeping a close eye on Bill Antonio—a teen with bubbling energy, incredible pace and dribbling wizardry who regularly leaves his senior and more experienced teammates in awe.

At 19, Antonio is not only a key member of his club but is also part of the national team, The Warriors. The team was eliminated in the knockout stages in the ongoing African Cup of Nations, before Antonio could make a contribution. Ndiraya is keeping a close eye on him not only to ensure a level of fitness but also because the future opportunities for Antonio – and therefore his club – in the global transfer market, are significant.

HAPPY TO BE CHOSEN

After a near two-year hiatus in sporting activities in his country because of the COVID-19 pandemic., Antonio is just happy that he has been chosen to make a difference, both at club and national level.

Antonio’s tremendous talent is bringing warranted attention to an institution in Zimbabwean football. Founded in 1963 in Harare and arguably the biggest football club in Zimbabwe, DFC has dominated the national league championship and to date boasts an unrivalled 21 titles.

Speaking with bird, it was clear that Antonio is remains stunned by the quick progress that has marked his career so far.

“I have always had a dream to become a professional football player. I knew I had what it takes, but never thought it would happen to me in my teenage years,” he said.

Antonio’s rise to stardom started early when, as a Grade 5 pupil, he was called up to the Gillingham Primary School first team. He excelled, catching the eye of other soccer coaches. At 14, he stunned the Prince Edward High School side during zonal football competitions. Impressed the skills of their young opponent, the school offered him a scholarship – an opportunity he jumped at.

In 2016, he joined the Zimbabwe national under-17 football team. Then came the Chibuku Super Cup, a major football competition whose winner gains the right to represent Zimbabwe at the CAF Confederation Cup. Antonio delighted the audience in the stadiums, with two goals and eight assists during the tournament.

Already a pivotal part of the Zimbabwe under-20 national team, the Cup gave Antonio national-wide exposure and opened the door for him to join the Warriors, Zimbabwe’s senior football team. On November 11, 2021, Antonio was capped to play in a World Cup qualifier against South Africa.

The training session at his club, attended by a bird correspondent, was being held opposite his school and his classmates formed part of the admiring crowd watching him in action.

Although unable to play at Cameroon African Cup of Nations, he remains unfazed.

ALL JUST ROUTINE FOR THE YOUNGSTER

Antonio lives in Dzivarasekwa, a high-density neighbourhood west of Harare. In this humble neighbourhood, his life is pretty much routine for the young player, who has had to juggle studies and club duties.

At the time of the interview, he was writing Advanced Levels examinations, which are the final public examinations in the high school system before university – not easy considering the travel required of a professional footballer. Yet, despite the success, he remains focused.

“With my first salary at Dynamos, I bought blankets for my parents and a television so they could watch me play,” he remembered. He and the family now hope to build a house, thanks to the salary he now commands.

Antonio’s role model is Senegal and Liverpool star, Sadio Mane—and his dream is to be Zimbabwe’s next big football export to Liverpool.

“I try to model my game around Mane. He is humble, disciplined and plays with so much skill and accuracy. I hope to reach the heights he reached. I know if I work hard I will get there,” he said.

HIGH EXPECTATIONS FOR THE FUTURE

He may be humble but he also knows how to plan. Antonio has high expectations of himself both on the football field and off it.

“I think in the next two or three seasons, if God continues to bless me and everything keeps going according to plan I should be playing in the UEFA Champions League,” he said.

He has a long term vision to give back to the neighbourhood that raised him, and to set a platform to discover and nurture talent in his country and Africa, perhaps through his own academy.

“If I get to play abroad and I have funds I want to rehabilitate sporting facilities in Dzivarasekwa where I grew up. I also want to make sure that I set up an academy, where young players can be taught the basics of professional football from an early stage,” he said.

Not short of confidence and with an ecosystem of professionals around him who are working hard to ensure he achieves his goals, that is hardly impossible.

The big question right now, is, what next for Bill Antonio?