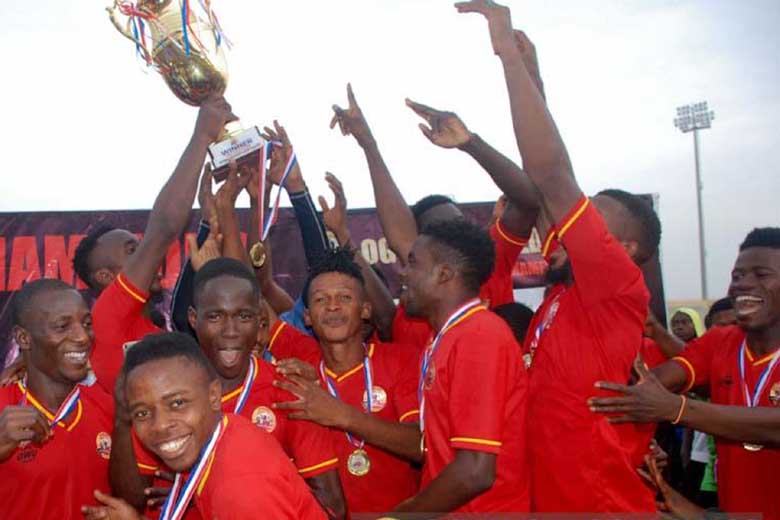 Abubakar Bukola Saraki (ABS) FC have emerged champions of the 8th edition of Ogunjobi Gold Cup preseason tournament after they outclassed Gombe United in five-goal thriller at the Kwara State Stadium in llorin on Friday (November 20).

The Saraki Boys who beat the Savannah Scorpions 2-1 in the group stage made history as they came from two goals down to perform a double against their opponents, scoring three superb goals.

It was a thrilling first half that produced three goals within 18 minutes.

Gombe took the lead in the 13th minute after Ahmed Jimoh tucked home from close range in a goalmouth melee.

Yusuf Abdulazeez took advantage of ABS FC poor defending to double the lead for the Savannah Scorpions, smashing the ball into the net from a rebound in the 24th minute.

The Saraki Boys made a superb come back to the game after Samuel Oyedeji scored from a brilliant free kick to make it 1-2.

ABS FC took the game to Gombe United in the second half as David Okoromi headed home from Oyedeji’s corner to put the scoreline at 2-2 in the 56th minute.

At the hour of the game, Okoromi put the icing on the cake for the Saraki Boys scoring his fifth goal of this tourney and a third goal for his team from another assist provided by Oyedeji.

It was little too late for the Savannah Scorpions to do a meaningful come back as the match official signalled the end of 90 minutes to the delight of the new champions.

It was a fantastic moment for ABS FC trio of Toheeb, Okoromi and Oyedeji as they respectively took home the best goalkeeper, top scorers and Most Valuable Player (MVP) awards.
Attachments area

SPN Africa - July 11, 2020
Norwich City has been relegated from the Premier League this season, courtesy of an astonishing performance by Michail Antonio, who scored all four goals...

Sammy Wejinya - August 16, 2020
Sevilla head coach, Julen Lopetegui on Saturday (August 15) warned that his charges would be coming up against the best Manchester United side in...