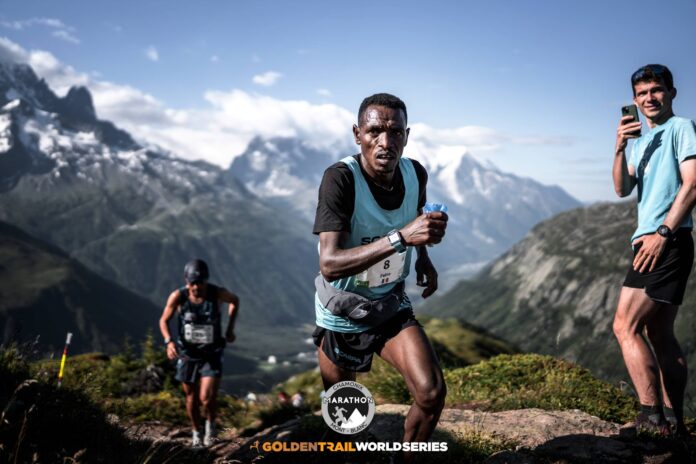 British athlete Jonathan Albon and Sara Alonso took line honours at the Mont Blanc ‘The Roller Coaster’ Marathon over the weekend in the second of the 2022 Golden Trail World Series but not before African athletes had given notice that they are likely soon be a force in trail, as they have dominated in road competition.

Albon and Alonso’s winning times of 3 hr 35 min 20 sec and 4 hr 14 min 49 sec respectively will stand as records for the newly designed course, following the decision to finish this year’ 42km race with a descent back to the centre of Chamonix, rather than the formidable final climb to a mountain top finish used previously.

Moroccan Elhousine Elazzaoui again raced well, coming from behind to move into second before finishing fourth and leading the African charge. But it was Kenyan Robert Pkemboi Matayango and Etritrean Petru Mamu who sought to control the action, running with Albon in the lead through the mountain village of Vallorcine 25km into the race.

But the all-round running skills and the technical superiority of Albon separated the leaders, with last year’s UTMB OCC 56km winner opening a decisive lead on the rocky single-track climb to Flegere aid station at 34km.

After losing the best part of a week’s training prior to the race due to prolonged dental treatment, Elazzaoui chose a more cautious approach than usual and it paid dividends. Moving up from 10th place in the first quarter to join the chasing pack, Elazzaoui crested the high point of the race at Col des Posettes at 19,5km in joint fifth with French athlete Thibault Baronian, 31 seconds down on Albon.

The Moroccan then overhauled Mamu and Matayango to move up into second place, only to be passed by fast-finishers David Magnini of Italy and Ruy Ueda of Japan.  But Elazzaoui, now in second place in the Golden Trail World Series rankings, was pleased with the outcome.

“The truth is I had a wonderful race and enjoyed support from the many spectators,” Elazzaoui reflected. “From the start of the race until 30 km it was Africa’s domination! I had moved up into second place before being overtaken, but I’m happy with the result. Last week I suffered so much with my teeth, but the next race will be better.”

Top South African trail athlete, Johardt van Heerden’s entry into European competition had been eagerly awaited but proved anti-climatic as Van Heerden suffered a mystery ailment which slowed and then stopped him completely. The South African was forced to withdraw from the race at Vallorcine.

“Running in heaven, feeling like hell”, was how Van Heerden summed up his race, quoting the well-known slogan of Cape Town’s 76km Peninsula Ultra Run Run (PUFfer) trail race. “Unfortunately, I fell sick during the race. Obviously, there are a lot of unanswered questions, but these things happen, and we move on.

“I’m not going to become over emotional about it all, but I’m definitely disappointed that my body did not respond how it should have. My build up was as close to perfect as one can wish for. There will be more races and I will continue on my journey to add pieces to the puzzle until I get it right on the international stage.

“I’m still feeling extremely thankful for the opportunity to be able to compete in Europe and these disappointments along the way make the successes so much sweeter.”

Team Salomon scored a one-two in the women’s race with New Zealander Caitlin Fielder racing across the finish line six minutes down on Alonso, currently in the form of her life. American Dani Moreno had to pull out all the stops in the final kilometre to hold off French athlete Anais Sabrie to complete the podium.

Albon’s North Face teammate, South African Meg Mackenzie, chose to race Mont Blanc at short notice. Now focused on training as an ultra-distance athlete, she nonetheless raced well on trails she knows better than most to finish 15th overall in a competitive field.

“I am happy! The standard of the woman’s field at Golden Trail is higher than ever and it’s really incredible to be part of it,” said Mackenzie. “Seeing the level consistently rise is so awesome – it makes all of us step up and push the limits. I’m so impressed by all the women out there!

“I ran a very happy race. I loved being out and being surrounded by all my friends! And it was excellent training for the longer-distance racing later this year.”

Next up in the Golden Trail World Series is a new event on the programme – the Stranda Fjord Trail Race in Stranda, Norway on 6th August, closely followed a week later by one of the best known races, the Sierre Zinal in Switzerland.