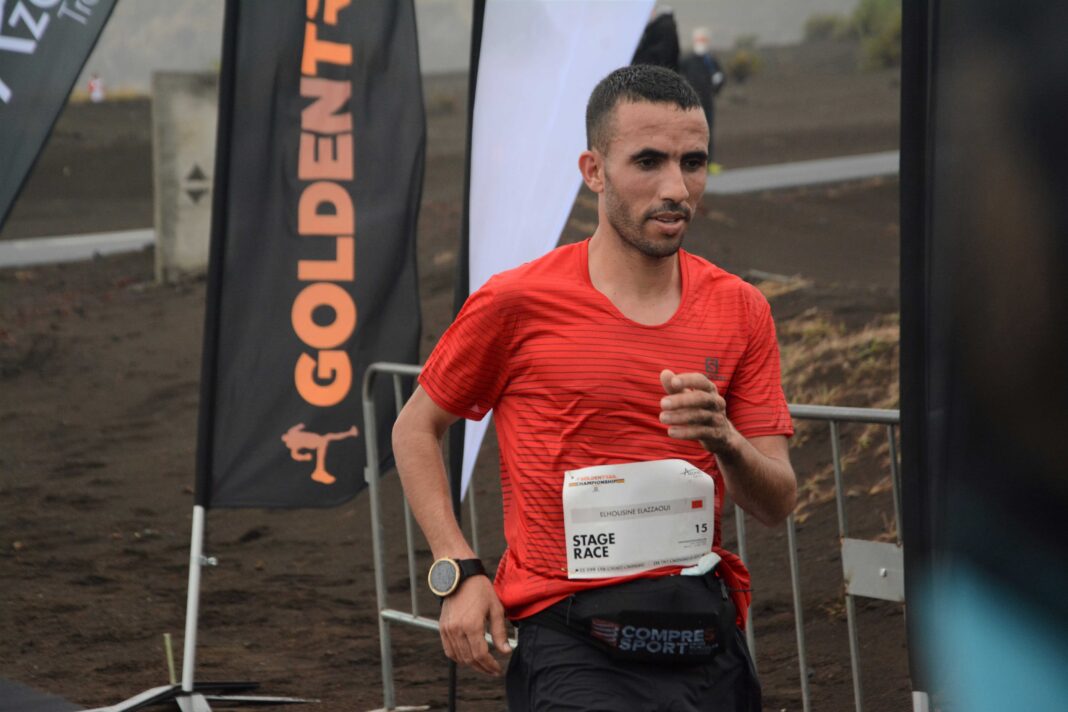 Polish athlete, Barlomiej Przedwojewski, swept to an exciting victory ahead of American Jim Walmsley on Day Two of the Golden Trail Championship on Faial Island in the mid-Atlantic, while Swiss athlete Maud Mathys turned the tables on Swede Tove Alexandersson to win the women’s race.

But the real story of the race came 5 km from the finish when close competitors Stian Angermund-Vik of Norway and Moroccan Elhousine Elazzaoui were fighting for supremacy and the final podium position. The Norwegian slipped and lost his footing but instead of taking his chance and opening a gap ‘Hassan’, as Elazzaoui is known, immediately stopped to lend a hand to his rival.

Appropriately the two, who placed within 6 seconds of each other in yesterday’s stage, crossed the line together without contesting the finish. “Coming around a 90 degree turn I stepped off the trail, slipped and landed on back in a bush,” Angermund-Vik explained. “Hassan immediately stopped and gave me a hand up, and then asked if I needed some water. I did not know Hassan before this event, but it was great that he did helped me even though we were battling it out for the third place on the podium.”

With a kilometre to go, Angermund-Vik had opened a slight gap on his Moroccan rival, running through thick grass in a cow field, but Elazzaoui came back to draw level. Instead of contesting the finish, the athletes chose to cross the finish line together, underlining the spirit of trail racing.

Early Walmsley had shown his mettle in the first half of the race, leading the field in the climb to the Caldera at just over 1000m, cresting the top in testing conditions of high-speed wind and almost zero visibility in thick cloud.  Przedwojewski followed 30 seconds behind, with Swiss specialist climber, Remi Bonnet close behind in 4th.

The Polish athlete opened a small gap on Walmsley at the start of the descent and try as he could, the American was never able to catch his rival, with Przedwojewski showing the speed and agility which earned him the title at the Golden Series Finale at the Otter Trail in 2018, racing home in 1 hr 56 min 03 sec – 45 seconds clear of Walmsley, with Angermund-Vik and Elazzaoui just over a minute in arrears.

Przedwojewski now commands a three minute gap over Day One winner, Frederic Tranchant, in the overall classification, with three athletes – Elazzaoui, Angermund-Vik and Walmsley a further three minutes back.

The question on how Alexanderrson’s ankle would stand up to the rigours of another testing stage following her ankle injury incurred on Day One, were answered positively, with the Swede opting to run more cautiously to save herself for the final stages.

That left the door open for another Maude Mathys display of fast trail running and she had little opposition, racing home in 2:13:15, but only two minutes clear of Alexanderrson.  French athlete Blandine L’Hirondel was a further two minutes back in third.

Alexanderrson holds a five minute gap on Mathys in the overall standings, with L’Hirondel a further five minutes in arrears.

Having started out in conservative fashion on the first day of the Championship, South African Meg Mackenzie upped the pace slightly, while still holding back in anticipation of the final two days. She improved by 10 places, moving up to 16th and will be looking to break into the top ten on Day Three.  The other South African at the championship, Robbie Rorich, also improved, breaking into the top thirty with a solid performance.

A focus on health is enabling a zero-tolerance doping culture to emerge in this running discipline.