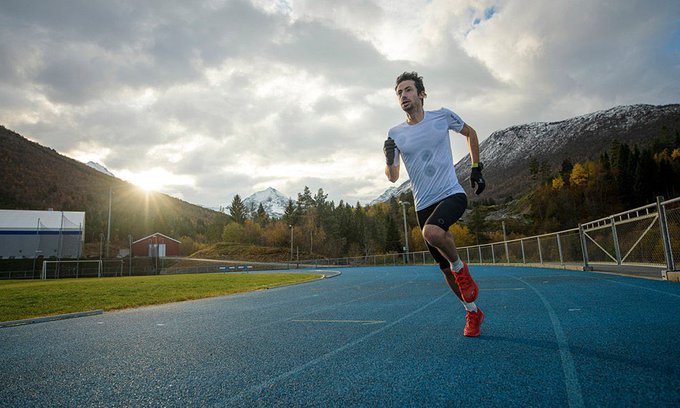 Yiannis Kouros is a living legend.  The Greek athlete’s extraordinary feats of ultra-distance running defy belief.  Many of his records, set in the 80s and 90s, still stand.  But one, of which Kouros boasted would stand for centuries, is under serious attack this week, from an athlete whose accomplishments have also achieved legendary status.

Tomorrow morning (Friday 27 November) the Spanish trail super-star, Kilian Jornet, will be trying to run further than 303,5 km, Kouros’ mark, in 24 hours around a 400 m athletics track near his home in Mandelen in Norway.

Jornet has broken virtually every trail record worth talking about over distances between 10 and 170 km (including that of the original 36km Table Mountain Challenge), has twice summited Everest, and many others of the world’s highest peaks.  But his latest challenge, the Kilian Phantasm 24 Project – named after the Salomon proto-type shoe he will race in and the polar opposite of climbing Everest –  may prove to be one of the toughest in his career.

Jornet typically tackles trail races with total ascents in the tens of thousands of metres. This weekend, his total ascent over 24 hours on the flat track will measure zero!  That may sound in his favour, but with muscles more accustomed to climbs and descents, it could prove his downfall.

Unlike Kouros, who had raced as often around a track as on roads, including a number of other 24-hour track races, this will be Jornet’s first ever track race.  Most long-distance athletes commence their track racing career with modest distances between 1000 and 3000 metres.  Jornet track debut will be over 300 km – a mind-boggling 760 laps.

Kouros’ career was extraordinary. He ran his first standard marathon in 2 hrs 43 min at the age of 21 years.  By the time he retired as an elite ultra-distance athlete shortly before his 60th birthday, he has broken a plethora of world distance records, his most impressive results coming from the longer-distance races, typically six or ten-day events.

The four-times winner and current record holder of the 250km “Spartathlon” between Athens and Sparta launched his ultra-distance career, and the 24-hour track record was one of his most prized accomplishments. He first eclipsed the existing mark of 170 miles in 1984, running 177 miles or 284 km at Flushing Meadows, New York, before taking the mark to 294.5 km in 1996 at Coburg, Australia.

Yiannis had a long-standing goal to run 300 km in 24 hours and he finally achieved that mark in Adelaide Australia late in 1997, when he stopped the 24-hour clock at 303.5 km – 27 km further than anyone else had ever achieved. Triumphant, he announced that he would “run no more 24-hour races” and that “this record will stand for centuries!”

Can Jornet do the unthinkable this weekend?  On the face of it, the Spaniard has no price.  Compared to Kouros, Jornet is an ultra-distance newby and track racing novice.  Kouros took ultra-distance racing to levels never previously seen, while Jornet’s track and road career is in its infancy.

But Jornet’s ability and success on trails is equally legendary and he has one weapon even sharper than that of Kouros – speed.  Recently Jornet ran 29:59 for 10 km on the road in tough conditions.  Kouros never ran faster than 31 minutes. And at an average time of 4 min 45 sec per km required throughout the 24 hours, Jornet should be well within his comfort zone.

“I’m not an athletics connoisseur,” admitted Jornet. “I’m more familiar with names like Svetičič (Slovenian alpinist) than Bikila, but this year I’ve been reading more about the athletic culture. And when it comes to long distance, Yiannis Kouros stands out above the rest.

“For me it’s an unknown terrain. If I tell you some predictions I will be lying because I really don’t have a clue. I’ve never ran a race on a track and the longest distance I’ve trained on flat terrain are 90km.  At the end, the goal is to explore a completely new terrain and effort for me to learn as much as I can.

“And now I’m super excited to test myself doing something that long but where I will learn so much and grow as an athlete.”

Jornet will be running in Salomon’s new S/LAB Phantasm, a lightweight road racing shoe yet to be commercially released.  On the day of the attempt, Jornet will switch directions every four hours on the track he now knows well. He expects temperatures to get as low as zero degrees Celsius at night and range from 8-15 degrees during the day.

South Africa’s Mackenzie and Rorich to take on world’s best in...

Stephen Granger - May 6, 2020
“This time for Africa” sang Shakhira, celebrating the arrival of one of the world’s biggest sporting events on the African continent – the 2010...

The Golden Trail: Blessings and injuries in The Azores

Stephen Granger - October 30, 2020
Horta, Faial Island, Azores Rain is regarded as an African blessing so the weather may have been tipping a cap to the region where the...