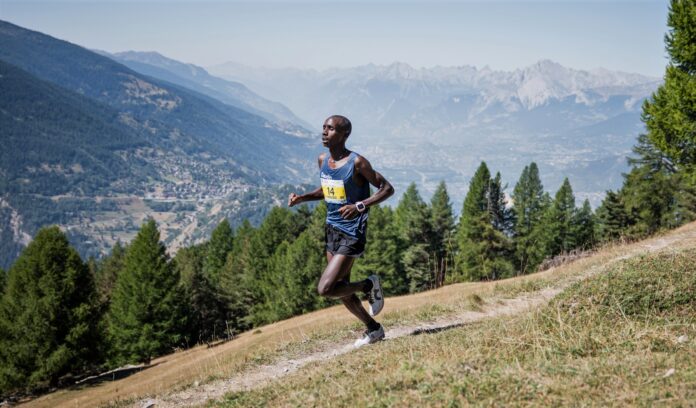 Kenyan distance runners, Mark Kangogo and Esther Chesang broke the chain of European and American dominance in trail running today (Saturday 13 August) with emphatic victories in one of the world’s premier trail races, Sierre-Zinal, in Switzerland, becoming the first runners from Africa to win a Golden Trail World Series race.

The 49th year of running action between the Swiss mountain villages of Sierre and Zinal once again attracted the cream of the crop of off-road athletes and a depth of quality seldom seen in the sport. Big names in the sport, often associated with top ten positions, barely made the top fifty.

The combination of athletes from trail, mountain-running, road and cross-country backgrounds ensured that the race lived up to its ‘Fast and Furious’ epithet from the start, largely due to the presence of east African athletes. And while some failed to stay the pace to the finish, several others did, leading to the demise of the previously dominant defending champions, Kilian Jornet and Maude Mathys.

No fewer than four Kenyans bagged top ten places in the men’s race, with Patrick Kipngeno (3rd), Philemon Kiriago (6th) and Robert Pkemoi (7th) joining Kangogo in the top bracket of race finishers, with an Eritrean, former winner Petro Mamu, sneaking past Jornet on the line to snatch 4th place, relegating the Spanish star to his lowest-ever finish in a Golden Trail World Series race.

Jornet and Mathys retained their race records, set in cooler conditions in 2019, although both records were under threat for much of the race. Although neither would have claimed to be in peak condition for the 31km dash, with Jornet focusing primarily on ultra-marathon trail over five times the length of Sierre-Zinal and Mathys arguably short of her best condition following muscle injuries earlier in the year, both were competitive to the finish.

Both came back strongly in the second half, with Mathys all but snatching what had earlier appeared an unlikely victory. The Swiss athlete closed to just 15 seconds with less than a kilometre to run, before surrendering the contest to finish 30 seconds back in second, with Sang almost six minutes off the pace in third.

A 2 hrs 12 min marathoner, Kangogo is a key component of the Milimani Runners – On Running project recently started in Iten, Kenya, to provide global opportunities for talented trail athletes. Having run second to Kipngeno in last week’s 16km Thyon Dixence race, also in Switzerland, Kangogo was determined to make this one count and literally raced himself to a standstill.

At Barneuza aid station, just 5km from the finish, Kangogo was four minutes up on Kipngeno and the course record was within his grasp. But the energy-sapping nature of the course, and in particular the steep descent, slowed the ‘Kangogo express’ to an ‘all-stations’ train and the Kenyan ran across the finish line in 2:27:31, two minutes off Jornet’s record and just 1 min 48 sec clear of the fast-finishing Spanish former track steeplechase athlete, Andreu Blanes, who moved up from 8th at the Hotel Weisshorn 11km from the finish.

Kipngeno, who had shared the lead with Kangogo in the first half of the race, completed a fine performance with a solid third, 15 seconds down on Blanes with Mamu stealing a march on Jornet to claim fourth.

The women’s race proved a nail-biting contest, with local hero Mathys fighting back after trailing by over two minutes through 20km to threaten to spoil the Kenyan party as she came storming back along the fast descent towards the finish. But it was not to be, as Chesang maintained her pace to the finish, racing home to a superb victory in 2:52:02, just 2 min 41 sec outside Mathys’ 2019 race record.

Top South African trail athlete, Kane Reilly, has raced Sierre-Zinal on two occasions, and he found it one of the toughest events on the calendar. “It’s so hard, such a brutal race,” he reflected. “Although it might appear to be more runnable, there are some big climbs and the course is certainly not easy.

Reilly is delighted but not surprised at the strong African showing. “It was always going to come and this a step in that direction. But this race is very different to other trail races, although it’s by no means a road race. But this is a huge step forward for Africa and fantastic for the sport.

“I hope the Kenyans might race trail in South Africa, as they have done on the road. And the prize money for several of our top races is quite attractive – more than in many other parts of the world. It will be very cool if they came to race here.”

Of the Golden Trail World Series events, Sierre-Zinal is undoubtedly the one most suited to athletes with a track or road background, who may lack the technical experience to master a race such as last week’s Stranda Fjord 21km in Norway. Few doubted that athletes from Africa’s Great Rift Valley would have the skills to excel in trail and the emergence of top African athletes in trail this year, and at Sierre Zinal in particular, can be compared to that in big city marathons in the early 1990s or in world cross country in the late 1980s.

While the more technical mountain-running skills of leading European and American athletes will likely ensure that athletes from those continents remain a force in trail-running, and particularly in ultra-trail, for many years to come, there is little doubt that this year’s Sierre-Zinal will go down in athletics’ history as a marker, signaling a potential change of the guard in marathon and sub-marathon distance trail running.  It could also point to potential African success in November’s World Mountain Running and Trail Championships in Thailand.