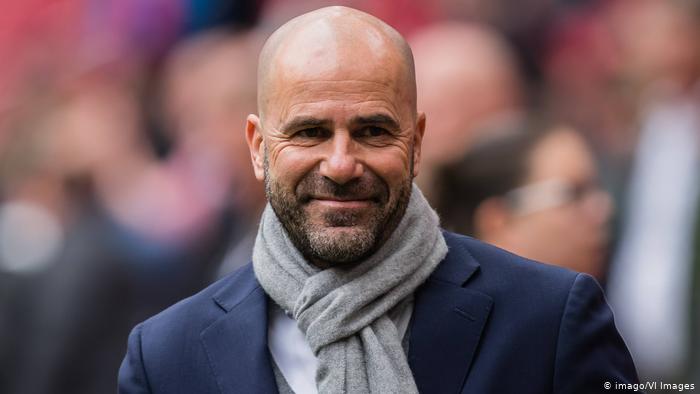 Bayer Leverkusen head coach, Peter Bosz asked German champions Bayern Munich for a favour on Saturday (June 13) when the Bundesliga leaders were to meet with high-flying Borussia Monchengladbach at the Allianz Arena.

Monchengladbach occupied the fourth and final UEFA Champions League place in the Bundesliga with 56 points from 29 matches but Leverkusen were in fifth with only goal difference separating the two sides.

The task facing Gladbach on Saturday was complicated as they travelled to Munich to face Bayern while Leverkusen were to be hosted on Sunday (June 14) by a Schalke side who have taken only a single point from their five matches since the season resumed.

Bosz was hoping for some assistance from a Bayern side that was without key players Robert Lewandowski and Thomas Muller due to suspension.
“Of course, we can take an important step when you see that a direct competitor [for the Champions League places] is playing away in Munich,” Bosz said on Friday.
“Although, I have to say that with Muller and Lewandowski, two important players are missing. Those are two leaders. That will make a big difference.
“But still, Bayern normally has to win this game. We know that, but there’s no point looking at the game if we don’t win against Schalke ourselves, and that won’t be easy, of course.
“I’ve always said that there are no easy games in the Bundesliga. That also applies to us, but if a direct competitor plays against Bayern, then maybe that’s an opportunity for us [to overtake them].”

Bosz also confirmed that Exequiel Palacios was in doubt for Sunday due to illness; however, the midfielder is just suffering from a bug, rather than coronavirus.
“So, today three players did not train,” he added. “Palacios was sick last night. I hope he’ll be better tomorrow.
“He doesn’t have the illness we’ve been talking about in the last months, just for your information.”

SPN Africa - June 24, 2020
Liverpool have been linked with Thiago Alcantara of Bayern Munich, according to German media outlet, Bild. Jurgen Klopp is a huge admirer of the 29-year-old...

Agency - February 23, 2021
Borussia Moenchengladbach take on high-flying Manchester City in the Champions League Wednesday with the German club's coach Marco Rose struggling to deal with the...

Agency - February 1, 2021
Bundesliga giants Bayern Munich confirmed the loan departures of Chris Richards and Joshua Zirkzee on Monday, while naming Liverpool and Chelsea as their main...