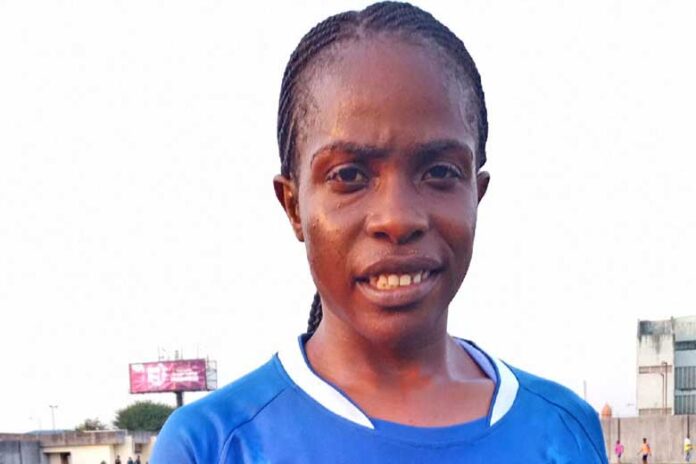 Pelican Stars attacker, Joy Okoronkwo has blamed fatigue for her side’s heaviest top-flight defeat so far, at the hands of FC Robo Queens.

The Nigeria Women Football League (NWFL) newcomers were roundly defeated 1-5 by the Lagos side in Wednesday’s Premiership matchday 4 clash at the Legacy Pitch, National Stadium in Surulere, Lagos.

Okoronkwo who scored her side’s consolation goal said she was happy about maintaining her record of always scoring against the Lagos side in all competitions.

“I feel bad over the heavy defeat in the hands of opponents, FC Robo Queens because we left Calabar hopeful to either win the encounter or at least pick a point but due to the tedious journey to Lagos some of us were outright tired and it affected us badly.

“Of course, fatigue is the cause… we arrived Lagos around 5:00 am today (Wednesday) and have to return to the stadium around 2:00 pm for the match, we barely rested, I myself could not even run very well… same as my teammates, this accounted for the high goal margin.

“However, I’m happy scoring the lone goal for my side even though it counted for nothing at the end of the day.

“It was a dream come true for me personally and that important goal is for my mother because I promised her that I’m going to score for her. I still believe that I will score more goals as the season progresses.

“I have been playing against FC Robo Queens and always scoring right from my days in the academy.

The Pelican Stars goal queen admitted that her side was finding the Premiership terrain tough going.

“Yes, it’s like we are finding our return to the Premiership somehow difficult but I believe we will bounce back when our key players would have returned to the team.

“And coupled with the way the governor is handling our matter right now I believe Pelican Stars will bounce back,” said the former Sure Babes FC jewel.

Okoronkwo said their hosts and opponents, FC Robo Queens have always proven themselves to be a good side.

“I have known FC Robo Queens since I was very small, they are always fit and can play good football.

“They played better today (Wednesday) and deserved to win but we will surely defeat them when they come for the reverse fixture,” said the Calabar side goal poacher.

Pelican Stars are at the bottom of the 14-team NWFL Premiership log on just one point; 11 behind league leaders, Bayelsa Queens.