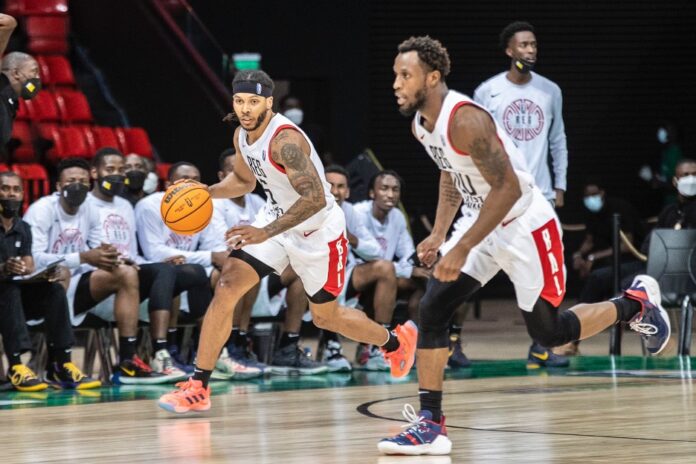 With the win, REG improved to 3-1 with one game left

Pitchou Manga came up with his best performance in the Sahara Conference on Monday to help Rwanda Energy Group (REG) cause the biggest upset in the Basketball Africa League (BAL) (www.NBA.com/theBAL) so far.

His 16 points, 10 rebounds, and five blocks sparked the Rwandan champions who ended US Monastir’s four-game winning streak in the 77-74 upset.

REG trailed for most of the first three quarters, but when Axel Moyo hit a buzzer-beater three-pointer to give the Kigali-based team a 56-55 lead heading into the fourth quarter, things were never the same again for Monastir.

And to make matters worse for the Tunisian champions, REG opened the final quarter with a 7-0 run for a 63-55 lead – their biggest lead in the game.

Mokhtar Ghayaza and Michael Dixon responded with one three-pointer each to cut the gap to 63-61, but REG never panicked even though Monastir tied the game at 67-all with 4:25 minutes left.

The next four minutes belonged to Manga who scored six straight points before fouling out with 40 seconds remaining.

Dieudonne Ndizeye backed Manga with 15 points, Cleveland Thomas Jr. added 12 for REG, who despite playing the majority of the game without Anthony Walker who picked his third foul in the first quarter, maintained their composure.

With the win, REG improved to 3-1 with one game left.

For Pack, who had limited time to prepare for the Sahara Conference, the win was special: “As a coach you want as much time as you can to prepare. We had five practices before my first game. Trying to create chemistry, trying to create a bond with these guys, to be able to win a game like this, it was very important for us. It was a tough challenge, but it was one that I was willing to ready to step up to, and I am glad that we got we got the win tonight.”

Throughout the game, Pack was at times seen trying push Manga for mistakes that he made. “He’s been like that all the tournament. We have been trying to establish him. He is a big body. We are trying to get him the ball, and tonight he was very aggressive with his post-ups. After the first quarter he started finishing, and that’s what we want him to do. We have some good perimeter players, we really want  him to have the ability to play inside, and tonight Pitchou was able to give us what we have been looking for. He played a great game.”

Mpoyo revealed that his contribution off the bench was long overdue. “I’ve always had that energy,” he said.

“I just needed to come out of the bench and do the little things, rebounding and take shots,” added Mpoyo who was 3-for-7 from behind the arc to finish with 9 points.

“This win says that we are going in the right direction. They are a really good team. We knew it was going to be a fight,” the Rwandan international player pointed out.

Radhouane Slimane and Ater Majok played on foul limit for most of the last quarter, but were to finish the game.

“We had some injured players, and we had to sacrifice. We are experienced enough to know how to react in certain situations,” said Slimane who contributed 19 points for Monastir.

Majok finished with 12 points and 14 rebounds and Michael Dixon led all players in scoring with 23 points.

“We made some mistakes, but some things in this game were out of our control,” Slimane stressed.

“They are a good team, maybe we’re going to play each other in Kigali.”

US Monastir concluded their Sahara Conference with a 4-1 mark, while REG will return to the court on Tuesday on Ferroviario da Beira.

Harouna, Stoglin step up as AS Salé improve to 2-2

Obekpa, Crawford spark SLAC to 2-2 with a game left in Sahara Conference