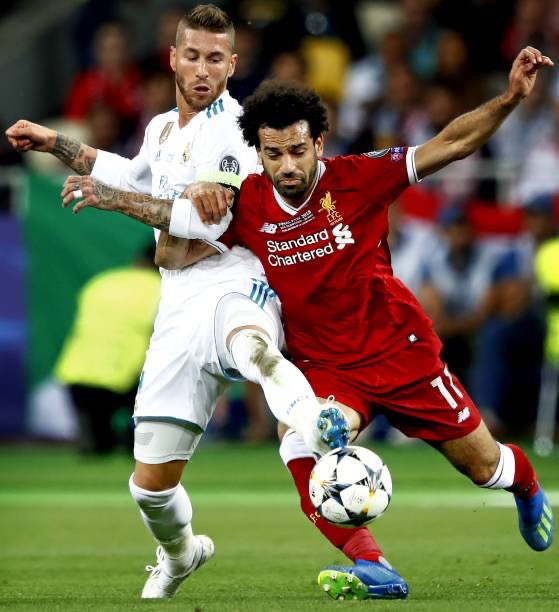 Chiellini however revealed that he is full of admiration for the way in which the Real Madrid Legend, Ramos uses the “dark arts” to his advantage.
During the 2018 Champions League final Ramos landed on Mohamed Salah in a way that ended up forcing the Egyptian forward to be substituted just 31 minutes into the match and Chiellini claims the clash was anything but accidental.

“He (Ramos) is the best defender in the world,” Chiellini claimed in his autobiography.

“They say he’s impulsive, not tactical at all, that 8-10 goals are conceded each season through his mistakes, that he’s very technical and that he could be a striker, which is the opposite of me.

“However, he has two characteristics that almost no one else has.
“He knows how to be decisive in big games, with interventions that go beyond any logic, that even cause injuries with almost devilish wit.

“The one on Salah in the 2018 Champions League final was a masterstroke.

“He’s always said that he didn’t do it on purpose, knowing that nine times out of ten, falling like he did and by not letting go, he risked breaking his opponent’s arm,” Chiellini said.

The veteran defender then pointed to the way in which the Real Madrid defence seems to fall apart without their captain.

“The strength he transmits through his presence alone is incredible,” the Juventuscaptain explained.
“Without Ramos, some champions like [Raphael] Varane, [Dani] Carvajal and Marcelo seem like schoolboys.

“With him at the [Estadio Santiago] Bernabeu, you can be sure that the Spaniards wouldn’t have lost to Ajax by three goals. I’d bet any money on that,” Chiellini concluded.