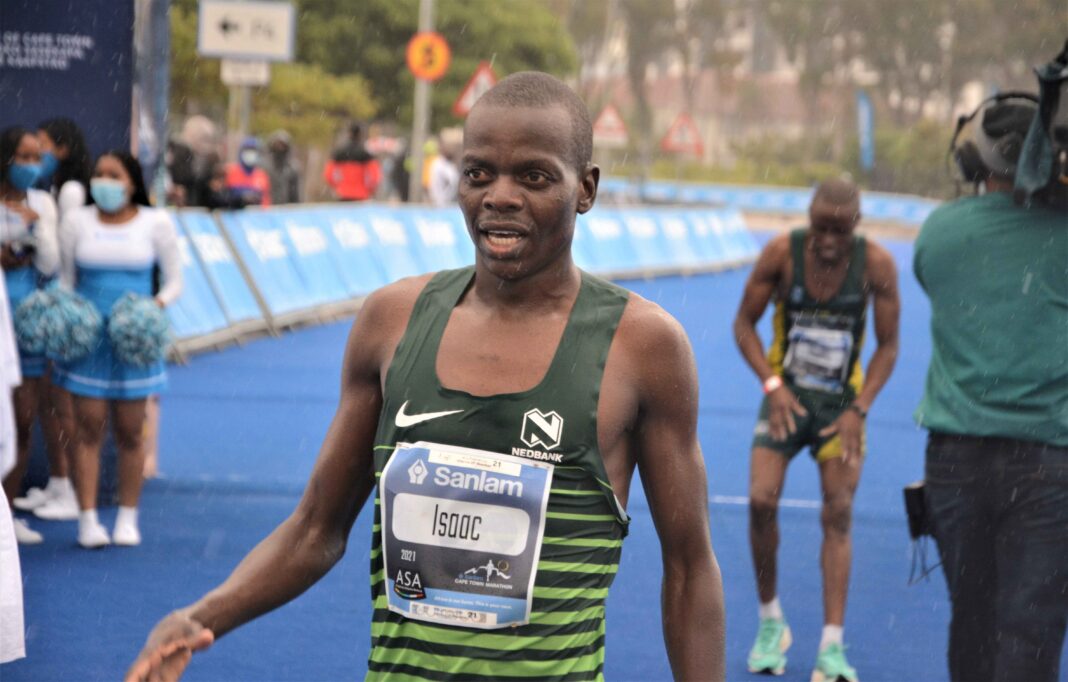 It was heartbreak Sunday for 33-year-old Zimbabwe marathoner, Isaac Mpofu, who was disqualified after running the race of his life at the Durban International Marathon to cross the finish line in 2 hr 10 min 24 sec.  Mpofu’s time was almost a minute ahead of his closest rival, South African Tumelo Motlagale, and well within the qualifying time for the 2022 World Championships in Oregon, USA, later this year.

But joy quickly turned to despair when Mpofu was informed he had been disqualified for a technical infringement, losing his R50 000 prize money but more importantly, his qualifier for both the 2022 and 2023 World Championships. Mpofu had failed to display a license number on the back of his running vest, as the rules of road running in South Africa require.

The Durban race doubled as the Athletics South Africa (ASA) Marathon Championships for 2022.

He worked hard in recent months with the aim of qualifying for the World Championships and the Zimbabwean left nothing out on the road as he raced to a big personal best time, only to learn of his fate shortly after. His manager, Craig Fry, lodged an appeal on behalf of his athlete, but the race Jury of Appeal upheld the disqualification.

Clearly unhappy with the outcome, Fry is taking legal advice and has lodged an appeal with the world governing body, World Athletics. If Mpofu was disqualified on a ‘technicality’, Fry believes there are several points in the process where the letter of the law was not followed by KZN Athletics, the provincial body responsible for the race. That should lead to a reversal of the decision, argues Fry.

“We lodged an appeal at the race, but they upheld the decision,” reported Fry. “I pointed out numerous aspects that were incorrect from their side, but they did not want to hear them. My attorneys have drafted an email to World Athletics highlighting the five or six race rules KZNA themselves broke in the (appeal) process and during the race.

“I have spoken to World Athletics technical officials, who said there’s no reason why the disqualification should not be overturned and Mpofu reinstated as the rightful winner,” Fry continued. “As soon as I have all the feedback, I’ll make a formal statement to that effect.”

Fry believes that the process of establishing the Jury of Appeal was invalid and that this should be sufficient grounds to overturn the decision. “Their whole process was flawed,” Fry argued. “The individual acting as the head of the Jury of Appeal shouldn’t have even been there.  If needs be, I’ll even take it to the Court of Arbitration in Sport – it’s not fair how they’re trying to railroad the guy.”

Not so, suggests KZNA president, Steve Mkasi, an attorney in his ‘day job’ and who discharges his athletics’ duties with efficiency, openness and transparency. “If anything, I am looking for a way to reinstate Mpofu,” reflected Mkasi. “I think that is what we would all want, but we do have a duty to apply the rules as they are written and are applicable to the race.

“In addressing the technical officials two days prior to the event, I wished them well and told them to apply the rules without fear or favour. And that is what they have sought to do.”

Historic challenges relating to the participation of foreign athletes in South African events have led to a plethora of rules and regulations to ensure fairness to all. But the complexity of the rules makes it increasingly difficult for the average athlete or even club to be fully appraised. It is largely up to managers, coaches and the organising officials to undertake what is necessary to ensure the smooth running of their event.

Rugby scrum laws are so numerous can complex that close examination of a video replay is almost bound to unearth some indiscretion. Similarly, it may be difficult for any race in South Africa to score 100% in the application of the finer minutiae of the laws.

Any foreign athlete wishing to compete in South Africa must provide a clearance permit to compete and, according to ASA rule 9.8, shall be issued with an ASA temporary license.  The rule transfers the obligation to procure the temporary license from the athlete to the race organisers, but the athlete remains responsible for fixing the numbers on both the front and back of his or her vest.

What may have counted against Mpofu, was the number of different explanations given to the Jury of Appeal for the misdemeanor. “I asked the Jury the reasons given for the appeal and three separate explanations came to light – that the number fell off during the race, that the number came off in the car taking the athletes to the start and that there was no number in the pack issued,” explained Mkasi.

Mkasi admits that they did not have a ‘call room’ for the ASA Championship, but points out that this is only mandatory for Track and Field Championships.  Nonetheless, a procedure to enable race officials to ensure compliance by elite athletes of all rules concerning clothing and license numbers immediately before the race starts would serve a useful purpose.

Mkasi stresses he would love to find a legal way to reinstate Mpofu. He welcomes Fry going to World Athletics and hopes that a loop-hole can be found. “In my legal profession, I would always look for any loop-hole to help my client, so I support Craig Fry’s attempt to do so here.

“None of us wants to see Isaac Mpofu’s hard-earned time erased and it is in the interests of KZN Athletics to have that fast marathon time linked to our race. I would do anything to find a way to reinstate Mpofu – as long as it is within the law,” concluded Mkasi.

Without a plausible explanation of what happened to Mpofu’s missing number, the race referee had little option but to disqualify the athlete finishing with no number attached to the back of his vest and the Jury would have been hard-pressed to turn around the decision. Most fair-minded observers would now hope for a reprieve for Mpofu on the basis of a ‘legal loophole’ but the incident will have alerted organisers of major road races in South Africa to be on high alert before their races are underway to avoid such an incident in the future.

Ultimately, the disqualification on a technical issue of the first athlete across the line in a major race does not serve the interests of the sport from a fan-base point of view.  The nuances of the laws concerning foreign athletes and numbers are likely to be lost on the majority.

Refereeing a rugby match according to the minutiae of the rule book could be counter-productive to the flow of the game. Trawling through the book of rules governing athletics in South Africa, which is a likely activity following such a disqualification, is likely to reveal other shortcomings and there is already talk of another potential ‘license number crime’ committed by another leading athlete.

While the drama around Mpofu’s eligibility unfolded, Central NW Province athlete, Motlagale, son of Adam Motlagale, a leading distance runner of the nineties, almost certainly booked his ticket to Oregon with a marathon PB of 2:11:15, which earned him the championship gold medal and, given Mpofu’s disqualification, first place in the Durban International Marathon. Motlagale raced impressively, taking the lead at 35km and opening a gap which he surrendered when Mpofu came through at a gallop.

Pietermartizburg-based Lesotho athlete, Tsepo Ramashoemole, was third across the line in 2:12:57 with South Africans Simon Sibeko and local athlete, Bonginkosi Zwane, rounding out the top five.

Shelmith Muriuki of Kenya was racing her third marathon or ultra-marathon in South Africa in two months, following the Nedbank Runified 50km in Gqeberha, where she placed second, and the Two Oceans Marathon, where she finished  fourth, and it was hardly surprising that an exhausted Muriuki faded badly in the second half.  She nonetheless held on to take line honours in 2:37:54 – just over three minutes ahead of Ethiopian Gete  Galato.

First South African and winner of the championship gold medal was KZN athlete Jenet Mbhele, third across the line in 2:43:07.

Special Edition – something out of the ordinary

It’s all systems go for the Trail Triple Crown

Stephen Granger - February 13, 2022
By Stephen Granger Cape Town’s Main Road is one of the oldest transportation corridors in South Africa, stretching down the spine of the Cape Peninsula...

All set for historic Sanlam CapeTown Marathon, live on spnafrica.com

Stephen Granger - October 17, 2020
The 2020 Sanlam Virtual Cape Town Marathon gets underway on Sunday morning in extraordinary circumstances which no-one could have envisaged when Kenyan Edwin Koech...

Olympics Special – SA’s Olympics marathoners to make the most of...

Berg a stepping stone for Khumalo

Stephen Granger - April 21, 2021
Zimbabwe-born Kwa-Zulu Natal-based ultra-distance athlete, Prodigal Khumalo, is a man on a mission, with a two major racing targets in his sights over the...