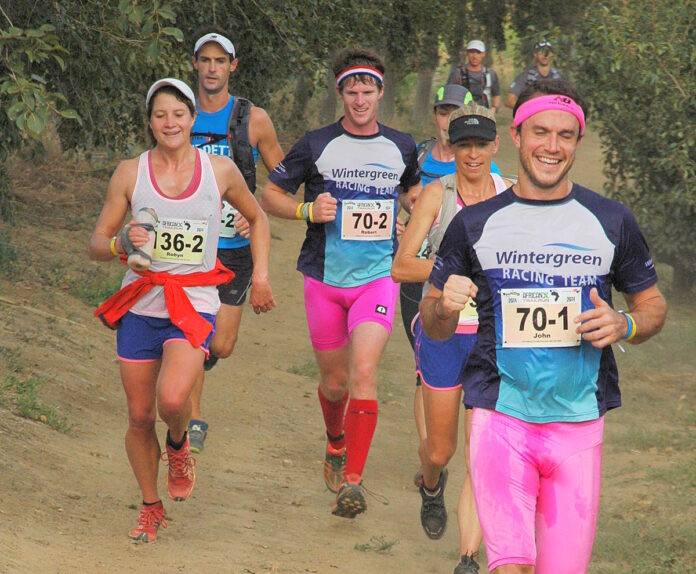 South Africa’s most prestigious stage trail team event, the THIRSTI AFRICANX TRAILRUN Three-day Stage Race, is back and returns to its most popular destination at the picturesque Houw Hoek Hotel this weekend ( 19 – 21 March 2022).

Launched in 2009, the THIRSTI AFRICANX TRAILRUN is synonymous with magnificent trails, spectacular views, mouth-watering food, a relaxed atmosphere, great vibe and most importantly, teamwork! Teams of two trail running enthusiasts (male/female/mixed)  will battle it out over a challenging but runnable route for overall honours, category success or simply personal satisfaction and pride.

Once again, leading trail athletes from the region will be racing ‘up hill and down dale’ in the mountains and valleys around Elgin, Grabouw and Bot River for prestige and prize money. But unlike the majority of trail races, this team event brings the added dynamic of running in close proximity to a partner, where knowledge of when to push or support one’s partner, or ask to be supported, can be a key factor in the success of teams.

As in the past, this twelfth running of the event brings together trail and road athletes to compete over scenic, but runnable trails through farmland and fynbos, infused with live music and dance and wacky costumes all a party atmosphere. Runners face three days of competition over a total of 74km, the first day of 24km followed by the most challenging day of 32km and ending with “dress-up day” over 18km to close out the event.

Top runners keep returning to THIRSTI AFRICANX TRAILRUN.  Two leading ‘trailers’ back this year after having enjoyed considerable success at the event are Kane Reilly and Landie Greyling, who last competed in the 2017 edition, where Greyling took line honours in tandem with Meg Mackenzie and Reilly paired with his friend and team colleague, Thabang Madiba, to place third.

In a formidable pairing, Reilly teams up with leading Cape Town ultra-trail athlete, Daniel Claassen, who debuts at AfricanX. They will be out for victory and are clearly the pair to beat. Both have achieved considerable success on the trails last year and will be looking for similar success at the start of the 2022 season.

“We’re definitely going out for a win,” said Reilly, whose victories last year included the Cape Town Special Edition 25km on Table Mountain against some of the country’s leading athletes and the George Mountain Ultra Trail over 60km.  He also placed a close second to Johardt van Heerden in the 46km Cape Town Trail Marathon. Few athletes can stay with Reilly when he is at his best and running with his friend and sometime training partner, Claassen, could bring out the best in him.

Claassen had a solid UTMB CCC 100km in the French Alps in August before gaining an impressive fifth place (and first African home) in the globally competitive Ultra-trail Cape Town 100km last November.  “Daniel and I had polar opposite runs at the UTMB CCC last year,” reflected Reilly. “So perhaps our strengths can complement us this weekend.  I had a great first half but the wheels came off after 70km when I suffered gastro issues. Daniel came from nowhere with a great second half to finish strongly!”

“The AfricanX has so many variables.  I’ve run it several times, firstly with Nic Rupanga and three times with Thabang Madiba. But I’ve never experienced a race which has gone perfectly, when we’ve both been strong at the same time.  Usually one is on song while the other struggles. But hopefully it will all come together this year!”

Cape-flats runner from Mfuleni, Nkombi, made the transition from road to trail several years ago and has been ‘in love with trail running ever since’. In particular, he says, “the THIRSTI AFRICANX possesses that special element – the culture of the race, the vibe and the routes that are world class – smooth and runnable.

“Retsipile and I have been working hard to achieve good results this year,” continued Nkombi. ”We have one goal and that is to be crowned champions at the THIRSTI AFRICANX TRAILRUN.”

The pair linked up for last year’s race, and although they were just off the final podium in an ultra-competitive field, they combined perfectly on the final day to take line honours for the stage. Following Khotle’s second and fourth positions in 2017and 2018 in tandem with Ben Matiso, the runner from Tokoza in East Johannesburg is determined to claim victory this time round.

Landie Greyling is another AFRICANX veteran, having lifted no fewer than five titles – three in the women’s contest in partnership with Meg Mackenzie and another two in the mixed category with husband Christian. She hopes she can shake of a troublesome head-cold in time to enjoy the trails with Comrades Marathon gold-medallist, Danette Walley.

After an initial focus on trail, the Somerset West-based Walley has focused on road-running and has been an important cog in the strong Murray and Roberts line-up. Coincidentally, Walley and Greyling took the top two places at the Bay to Bay 30km road race in January, with Greyling finishing runner-up, just a minute slower than Walley.

“This has been something of a last-minute decision,” admitted Greyling. “Danette phoned me just three weeks ago and it sounded like fun.  I think we will complement each other well. Perhaps I will be stronger on the more technical trails and she could be faster on the more runnable sections.”

Ranging strongly against the more experienced pair are Stellenbosch-based athletes Lijan van Niekerk and Marion Leiberich. Van Niekerk is one of the up-and-coming young athletes who has already made her mark, having won the Old Fisherman’s Trail Challenge over 24km last winter.  German-born Leiberich races infrequently, but proved her mettle with an impressive run, close behind Toni McCann, in the 2020 Gone to Gone 21km .

Two leading trail athletes, AJ Calitz and Kerry-Anne Marshall, form an intriguing team in the Mixed Category competition. Both vastly experienced, possibly in the twilight of their elite careers, both are ultra-competitive and determined athletes and will prove tough to beat.

Calitz has won several AFRICANX titles, four in the men’s competition in conjunction with Bernard Rukadza and Ben Brimble and one in the mixed competition, paired with ultra-distance star, Nicolette Griffioen. And he won’t want to stop there in his new partnership with long-time friend and fellow ultra-distance specialist, Marshall.

“I’ve had a few health challenges in recent months,” admitted Marshall, gold medallist at both Comrades and Two Oceans. “So will unlikely race South Africa’s big ultra-distance road races this year. I’m feeling stronger now and I’m looking forward to having fun on the trails with AJ. We’ve been good friends for ages through trail running. We were both at the War Trails event in Lady Grey about a month ago and decided to run AFRICANX together.”

Apart from premier trail running experiences, fun and entertainment will be watchwords at Houw Hoek. South Africa’s favourite Reggae band, The Rivertones, will bring their unique ‘vibes’ to post-race relaxation with other activities including a marimba band performance, wine tastings, a pasta party, bingo and popcorn, fire drums, a slippery slide, a Gordon’s Gin bar and much more.