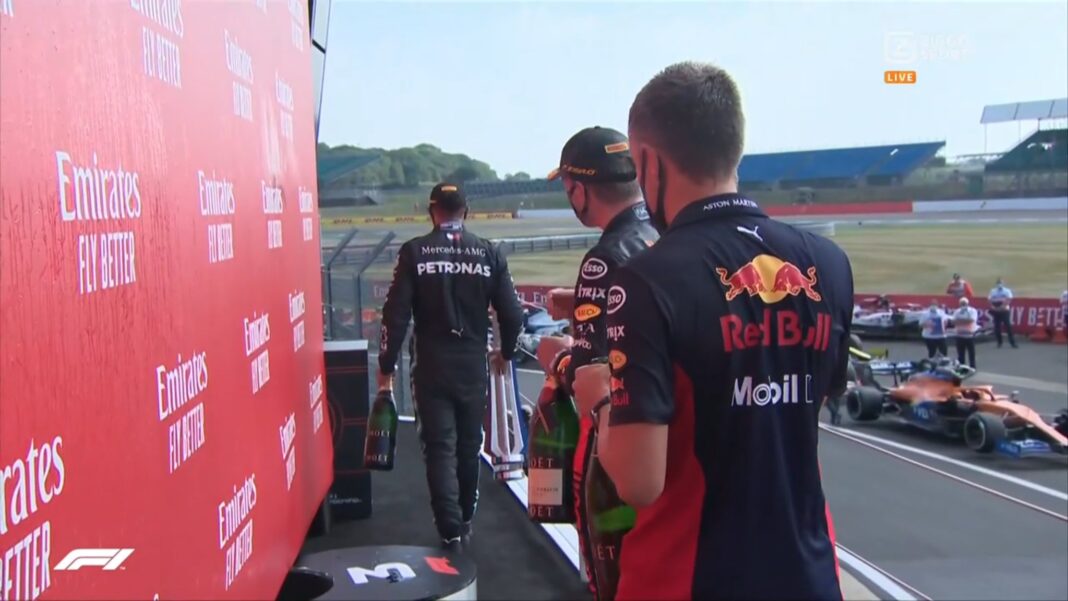 Dutchman, Max Verstappen won the 70th Anniversary British Grand Prix on Sunday (August 9) as he became the first non-Mercedes driver to win a race in 2020.

The Red Bull driver won from underneath the Mercedes pairing of Lewis Hamilton and Valtteri Bottas, who started on pole, with an incredible display at Silverstone. Verstappen was also the only driver in the top 10 to begin the race on the hard tyres.

After starting in fourth position – which became P3 by Turn 1 – Verstappen quickly passed the Racing Point of Nico Hulkenberg and then managed his pace brilliantly throughout the race, pressuring the Mercedes early on before taking the lead from Bottas with a brilliant move around Luffield, before racing to the finish for his first victory since Brazil last year – and Red Bull’s first at Silverstone since 2012.

Hamilton enjoyed a late-race surge, passing his teammate with two laps to go into Brooklands to claim second place – equalling the number of podium finishes of Michael Schumacher in the process. It was the second time in three years that Bottas has failed to convert a Silverstone pole into a win, as he came home third.

Charles Leclerc was another driver to manage his tyres well, making a one-stop race to claim a fine P4, while teammate Sebastian Vettel could only manage P12, having spun on the first corner.

Alex Albon took fifth for the second Red Bull, passing the Racing Point of Lance Stroll with a lap to go, Stroll ending up P6 ahead of stand-in teammate Nico Hulkenberg, who stopped late for soft tyres.

Rounding out the top 10, Esteban Ocon was in P8, ahead of the McLaren of Lando Norris and the AlphaTauri of Daniil Kvyat, who despite his lower starting position, finished one spot ahead of teammate Pierre Gasly to take his second point of the season.

SPN Africa - February 21, 2021
MotoGP on Friday (February 19) announced that it was releasing a new version of its popular e-game, developed for the franchise by Milestone and...