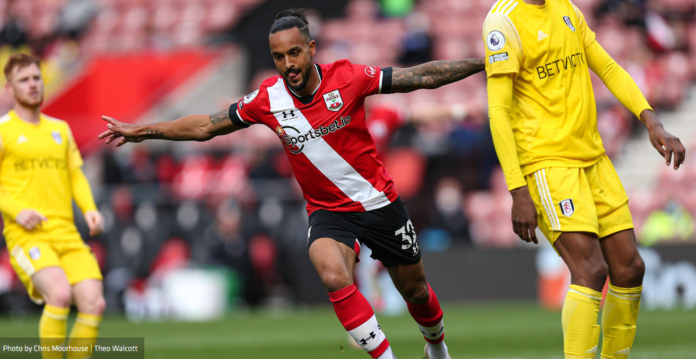 Southampton Football Club is delighted to confirm it has reached an agreement in principle with Theo Walcott for the forward to return to Saints on a permanent basis.

Academy graduate Walcott has been on loan at St Mary’s from Everton this season, and he will now put pen to paper on a two-year contract after his current deal with the Merseyside club expires at the end of June.

It will complete a remarkable and poignant homecoming for the 32-year-old, who burst onto the scene in 2005 when he made his first-team debut at the age of only 16.

Walcott, who scored his first senior goal against tonight’s opponents, Leeds United, then went on to enjoy an illustrious 12-year spell as an Arsenal player, earning 47 England caps in the process, before transferring to Everton in January 2018.

He made an emotional return to Saints in October 2020, joining on a temporary basis for the current season, in which he has made 22 appearances and scored three goals, the most recent of which came in Saturday’s 3-1 home win over Fulham – Walcott’s first strike in a Southampton shirt at St Mary’s since he netted in a 4-3 FA Cup win over MK Dons in January 2006.

Speaking about the agreement to return to the club on a permanent deal, Walcott said: “I’m not sure I can properly express how happy I am about this. Southampton is a club that means so much to me, and it has been incredibly special for me to have spent this season back at St Mary’s. But to now have the opportunity to return for a further two years means such a great deal to me, both personally and professionally.

“I would like to say a huge thank you to the club, my teammates and the fans for making me feel so welcome back here, and I can’t wait to continue pulling on the shirt in the next couple of seasons. Hopefully in that time we can make a few more special memories too.

“I would also like to say thank you to everyone at Everton, who have been so good to me throughout my time with the club, and I wish them every success in the future.”

Southampton manager Ralph Hasenhüttl added: “Theo has been a very good influence for us this season. He is a very professional player who does things in the right way and has a very positive impact not only on our young players but on the dressing room as a whole.

“He understands the way we want to play, he has shown great commitment and he has also shown how he can be an important part of our game. I think he is a player who can continue to help us in these next two years, so I am pleased that he has agreed to stay with us.”