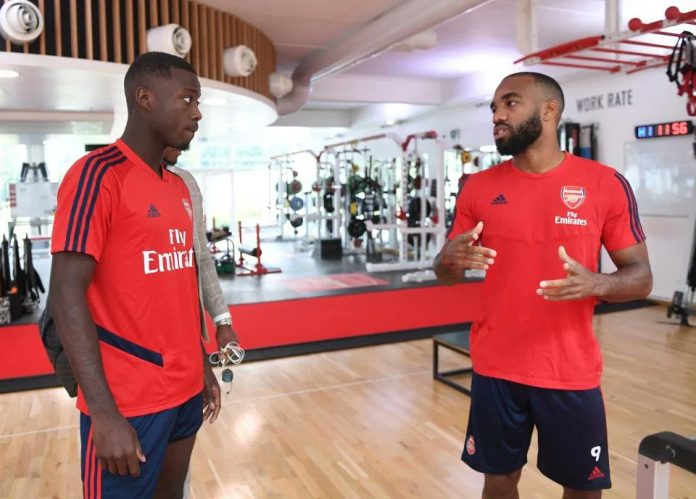 Footage shared on WhatsApp showed Gunners club-record signing, Nicolas Pepe playing football with several friends in north London. Fellow teammates David Luiz and Granit Xhaka were also spotted having a get-together on an open space in Southgate.
Meanwhile, Alexandre Lacazette was pictured standing next to a car valet cleaning the Gunners player’s Audi in his driveway.
Arsenal management are believed to have spoken with Ivory Coast international Pepe and are believed to be planning to speak with the other players to remind them of their responsibilities.

A club spokesman confirmed this on Wednesday.
“Thank you for bringing this to our attention. We’ll be speaking to our players,” a Gunners spokesman told The Sun.
“We were concerned so we have spoken to Nicolas who shares a house with a number of relatives who were involved in this game.
“We have reminded him of the importance of everyone following the guidelines.”
All four incidents are said to have taken place over the last week, the latest being Luiz and Xhaka’s kick-about which was said to be on Tuesday.
Other Premier League stars have been blasted for breaching the rules recently while millions of others, much less privileged than themselves, remain in lockdown throughout the UK.
Earlier this month Tottenham manager Jose Mourinho was forced to apologise after he was seen conducting an outdoor training session with the club’s record signing Tanguy Ndombele.
Meanwhile, City’s Kyle Walker was forced to apologise after it was revealed he was fined £240,000 by his club for holding a sex party at his home.
And Aston Villa captain Jack Grealish was embarrassed when he was pictured at the scene of car crash just hours after he posted a video message on social media asking people to obey the lockdown rules put in place by the Government.