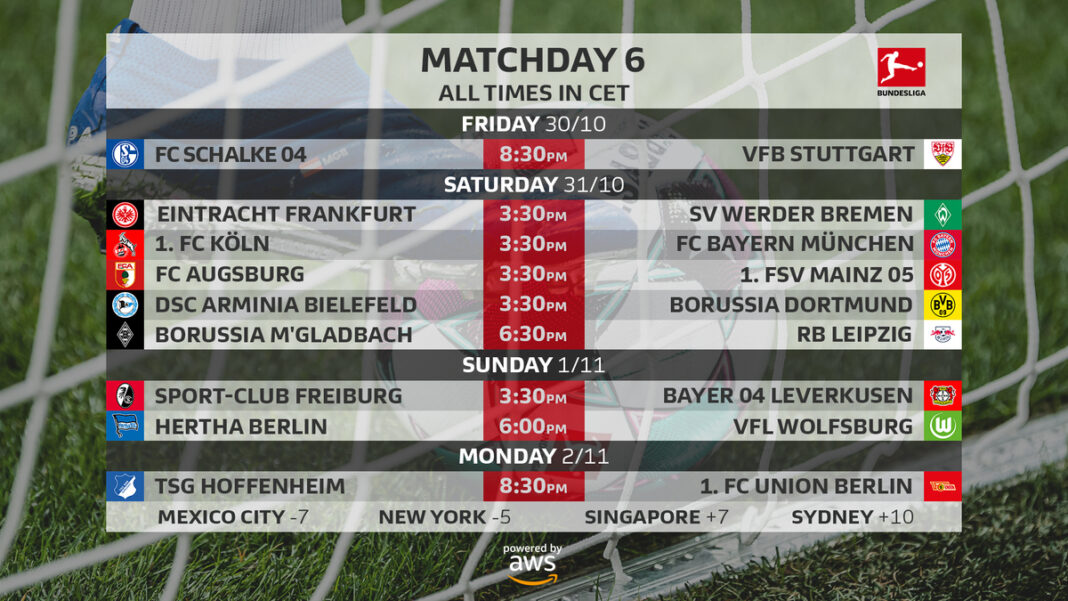 Bundesliga fans are greeted with another four-day weekend of German top-flight
action on Matchday 6, with both FC Bayern München and Borussia Dortmund in
action on Saturday afternoon.

The defending UEFA Champions League winners travel to face 1. FC Köln at the
RheinEnergieSTADION. Last weekend UEFA Men’s Player of the Year Robert
Lewandowski fired a perfect hat-trick (one left foot, one right foot, one header) to
become the first player in league history to reach 10 goals after just the first five
matches of the season. Head coach Hansi Flick will be keen to keep applying pressure on ladder leaders RB Leipzig, with the Bavarians currently sitting second.

Meanwhile, Dortmund head to DSC Arminia Bielefeld at the same time following
their Revierderby victory last weekend. History suggests they will have to produce
their best to come away with a win against the newly-promoted side. In their
previous 17 trips to Bielefeld, Dortmund has won just twice and lost ten times.
Armenia has notched more Bundesliga home victories over die Schwarzgelben than
against any other team – and last lost to them there 21 years ago.

The action kicks off on Friday night when struggling FC Schalke 04 host a promoted
VfB Stuttgart who are taking to the Bundesliga like a duck to water in their first
season back. The hosts, meanwhile, have not won in 21 league matches, a record
they will be desperate to put to rest.
Saturday evening’s fixture is perhaps the highlight of the weekend on paper as

Borussia Mönchengladbach host table-toppers RB Leipzig at Borussia-Park. The
Foals were only denied a famous win over Real Madrid in the UEFA Champions
League in midweek by two late goals and will be more than motivated to right those
wrongs against Julian Nagelsmann’s side in a mouth-watering contest.

Our Sunday double-header takes us first to the Black Forest as SC Freiburg play host
to Bayer 04 Leverkusen. Peter Bosz’s team have scored nine goals in their last two
games in all competitions and are one of just three undefeated teams left in the
Bundesliga alongside Leipzig and another team in action on Sunday, VfL Wolfsburg,
who travel to Hertha Berlin.

After four successive draws to start the campaign, the Wolves took three points for
the first time last weekend and travel to the capital to face Hertha BSC Berlin at the
Olympiastadion full of confidence, while summer signing Matteo Guendouzi could
be set to make his debut for the Old Lady at home.

The weekend’s action is rounded off on Monday when 1. FC Union Berlin travel to
face TSG 1899 Hoffenheim. The Berliners are undefeated in four Bundesliga
matches, and five would be a club record, but they are coming up against the only
team to have beaten Bayern in 2020.