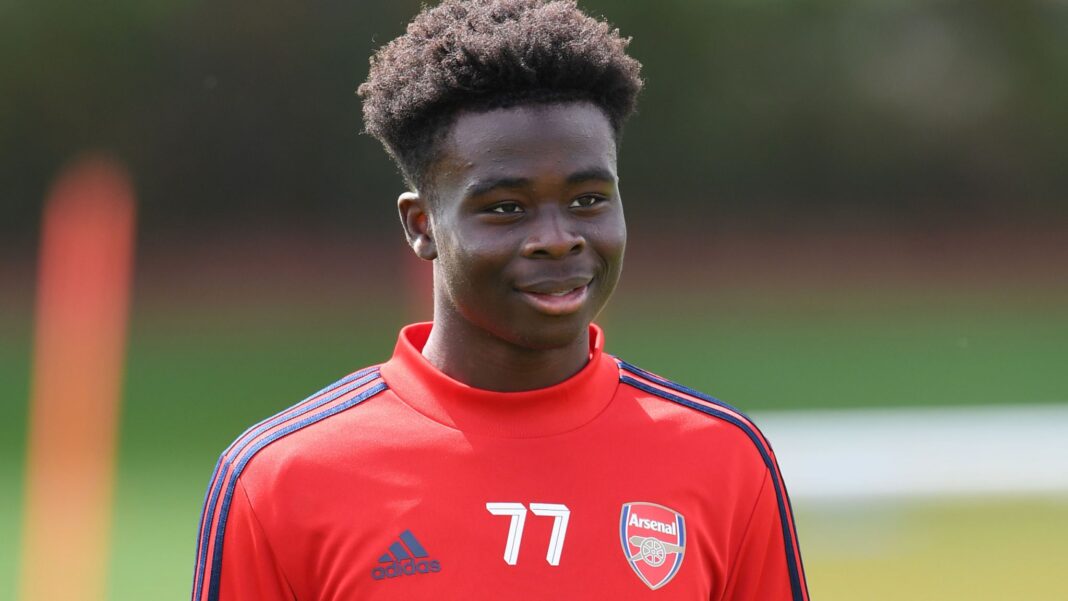 Young Arsenal star Bukayo Saka, who is eligible to play for both Nigeria and England, may have to make a choice in the coming days. Up until now, he has remained undecided. The 18-year-old whizkid has attracted attention from both camps, following his scintillating form at Arsenal this season and the pressure will be on him to make choice.

Saka has been capped by England at Under-16, Under-17, Under-18 and Under-19 levels but he is still eligible to play for Nigeria’s senior national team as he has never represented England at the seniors.

Saka has previously admitted that he would be “proud” to pull on a Super Eagles shirt in homage to his parents’ heritage.
“It’s a tough choice (as) I’m happy to have represented England at youth level but I’m also proud of my Nigerian heritage from my parents,” he told SkySports.

“We haven’t been picked by any team so it’s about staying humble and when the time comes we’ll make the decision.”

England boss Gareth Southgate has been keeping close tabs on the youngster – who has been one of the club’s best players this season, after breaking through from the youth set-up. Saka nabbed his first Premier League goal at the start of July with an excellent finish against Wolves, which proved to be the winner.

The young player has established himself as a regular starter, having made 27 appearances in the top-flight. If he carries on like that, the postponement of Euro 2020 could prove to be a blessing in disguise for Saka, who offers Southgate plenty of quality in a number of areas. Nigeria are said to have stepped up their efforts to lure Saka away from the Three Lions.

The Daily Mail claimed Nigeria are prepared to fast-track Saka into their first-team. The Super Eagles also desperately wanted Tammy Abraham to snub England and play for them instead – despite him having two Three Lions caps. Abraham is eligible to play for the country as his father was born in Nigeria.

Nigeria Football Federation president Amaju Pinnick told SunSport back in 2017 that Abraham was poised to snub England for them.
However, Abraham then issued a statement denying the claim and pledging his future to England.

Southgate’s head has also been turned by United’s Greenwood, 18 – who has been dubbed as the Red Devil’s new wonderkid.
Saka added: “Greenwood and Jude Bellingham have so much quality. Whether they are 18 or 28 or 38 they’ve got quality and when you’ve got quality you’re going to be in the team, providing you can apply the right attitude.”

Phil Foden, 20, has also emerged as one of England’s top talents on the big stage and was said already to be in Southgate’s plans.

Agency - 30/03/2020 0
Tottenham Hotspur striker Harry Kane said on Sunday that he could leave the Premier League club if the team does not progress...
FA Cup

Arsenal through to FA Cup semi-finals

SPN Africa - 29/06/2020 5
A last-gasp strike from Dani Ceballos capped a dramatic finale at Bramall Lane and propelled Arsenal into...
Football

Agency - 02/04/2020 5
England coach Eddie Jones has agreed a contract extension which will see him continue in the role until the 2023 Rugby World...