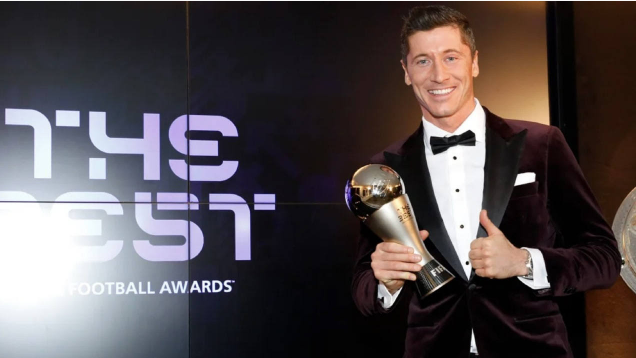 The Best FIFA Men’s Player 2021 talks about what the award means to him, how important his family has been in his development, and reveals special moments in his career.

What does it mean to you to have won the vote for The Best FIFA
Men’s Player 2021?
“I have to say that is a huge honour and I’m very proud of this award.
Because everything that I did and that I’m doing makes me proud. I’m
very happy to win these kinds of awards. Because these awards also
belong to the team, because we are all together as one player.”

Does winning this award motivate you even more and bring out
the best in you?
“If you love this sport, if you love this game like I do, it’s always easier to
be motivated for the next step. It doesn’t matter how many games you
won or how many awards you won. For me, it’s more important how many
games are still to win, or how many titles are still to win. And this is the
difference. And even after awards, even after the next title, it makes me
more motivated for the next win.”

How important do you think this title is for the Bundesliga as a
league?
“I think that every award means a lot for the league – for the team as
well. Because we are playing as a team during the game and throughout
the season. And all these individual awards also are important for the
club. Winning titles with your team is always special – because they are
the most important – but also individual awards are important, because it
means that you consistently did good work. And so many people are
talking about these awards, talking about these titles, so it is good not
only for me but for the club and all the league as well.”

Manuel Neuer was also shortlisted for the World XI. How
important is Manuel’s backing for the team?
“Yeah, he’s a great goalkeeper. Not only goalkeeper but he’s a great man.
It doesn’t matter how old he is, he still shows that he’s the best. Even
during training sessions, for me he’s the competition, I see it as a
challenge to score goals against him. And also because of him I can be
better. Because if you have the best goalkeeper in front of you in training
sessions, the next challenge, the next step is to find the solution

On Instagram you gave us a nice insight into your family life at the
weekend. You made your daughter a pigtail with a hoover. How
did that come about?
“I saw some video a few months ago, on the internet of course, and I
know sometimes in the morning I don’t have much time to do my
daughters hair. I asked her if she will be happy if we can try doing like
this. At the beginning, she was like: ‘okay, but I’m not sure’. But after we
tried it, she loved it. She was so happy because of this technique, this
style. And for me this was an easy job I can repeat regularly. It was also
great to spend time together as well.”

One more thing about your family. You once told me that you used
to have to do many sports because your parents wanted you to.
Describe that again. Why did they want you to play more than
football?
“Yeah, my parents were teachers of physical education. My father taught
my class so every time when I did physical education, I expected to play
football. But that wasn’t always the case. At that time I didn’t understand
why we were playing other sports like basketball, handball, or volleyball,
because I just wanted to play football. But later I’ve understood that other
sports make me more flexible – they teach you different movements as
well. Not only the typical movements of football players, and I see even
now the difference between me and other players because my body is
more flexible. That’s why I did a lot of other sports. Now I can be
thankful. I want to say thank you to my dad for making sure I didn’t play
just football.”

One of the highlights of the last Bundesliga season was certainly
your 41st goal of the season, which broke the Bundesliga goal
scoring record. Do you still have it in your mind’s eye, and can you
tell us again what happened before and after the goal was scored?
“Of course I still have this moment, this whole game, in my head. Because
I remember exactly that during the whole game I couldn’t score this last
goal, the 41st goal. I tried to score with the left, right, again left, again
right and I couldn’t score. But other players scored easily. In that
moment, the last minute, the last seconds, I knew that I had to be ready,
that the situation was coming. I think Leroy Sané tried to score from
distance, from 20 metres, something like that. And I felt that the moment
is now. I knew I was not offside, that the goalkeeper made a small
mistake, and I have to be in the right place in the right moment. And after

that, when I scored this goal, I didn’t exactly know what it meant but I
was so happy. That impossible is possible. A legendary record – to do it
means a lot for me and I was so, so happy after this goal. I couldn’t
believe that I had done it!”

Has anything changed in the way you are perceived since then?
From whom, perhaps outside football, have you received
recognition for this?
“I dedicate this new record to Gerd Müller. In 49 years, nobody was close
to breaking this record. And because of him, I could set the new record.
He showed the heights you can achieve in the Bundesliga. But a few years
ago, I thought that it’s impossible to do it like he did it, but after 49 years,
I did it. And this record is so amazing and it’s something special because
of him as well. Even now, it makes me proud, makes me happy, because I
didn’t dream about breaking such a huge record in the Bundesliga. And I
did it. All the support I got this season and the last year as well means a
lot to me. Because I knew it would not be easy after my injury. I thought
maybe it was impossible to score so many goals, to break this record. But
when I came back, I knew that I had to work hard and still believe that
it’s possible.”

With 23 goals in 19 games, you are on track to beat your own
record. Does this spur you on even more?
“Yes. I missed a few games last year through injury, but hopefully I will
be able to play 34 games this season and maintain the same level of
goals. This kind of season can happen once, maybe twice if you are lucky,
and you show a good performance as well. But I always try to do my best,
I am always trying to keep this high level of quality. But in the end, all
records for me mean something special, something extra. But I will
always think about my team – about winning the title with my team.”

We noticed something in the game against 1. FC Köln: You are a
master at not running into offside positions. Your timing is
incredibly good. Did that come with experience, or did you work
on that specifically? How did that develop?
“If you play football for 25 years, you know when you aren’t offside
because you can see the line of defenders. I wasn’t focused only on the
ball; I was also focused on the line of defenders. And I knew that I was
not in an offside position. For the striker in the box, you don’t just have to
think fast, you also have to see quicker than your opponent as well. And
in this situation, I knew it was not offside, the goal was correct, because