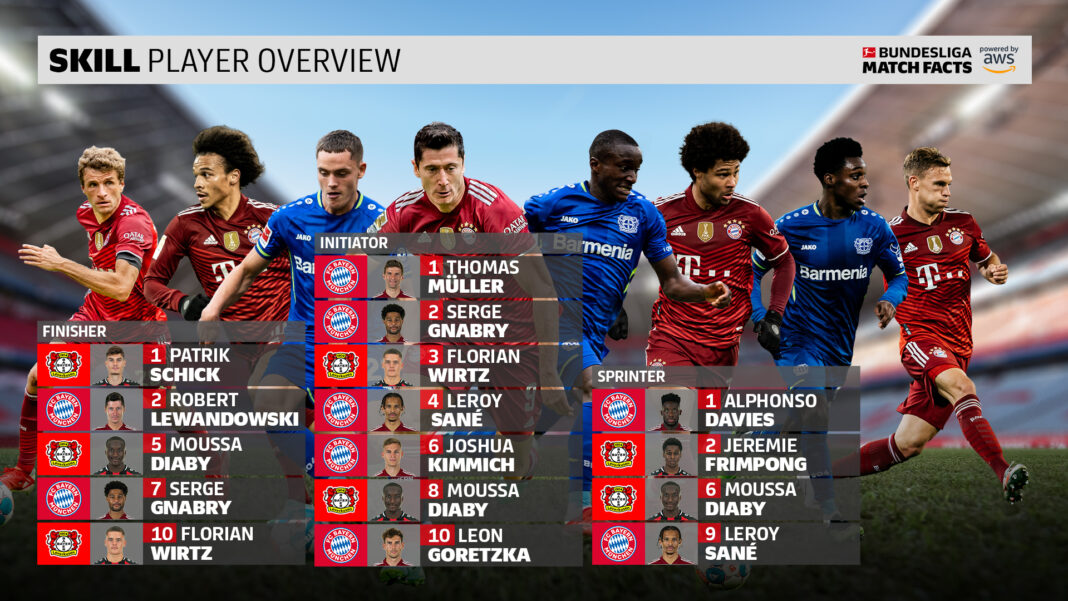 The clock is ticking fast as with 10 rounds to go, the 2021-22 German Bundesliga season is gradually nearing the finale.
The biggest game of this matchday goes down at Allianz Arena as league leaders, Bayern Munich entertain third-placed Bayer 04 Leverkusen.
The hosts’ eight-point lead will definitely be under threat as Gerardo Seoane’s visiting charges have lost just once in their last seven Bundesliga games – a run that included four straight wins.
However, Julian Nagelsmann’s Bavarians are unbeaten in three and this fixture has recently seen his side as the dominant party.
Bayern are on a winning streak of five games against Leverkusen – who have not been able to keep a clean sheet against them in 11 games.
There is another interesting clash to watch out for in this contest as the top two goalscorers in the division go head-to-head. Robert Lewandowski leads the way with 28 goals and Patrik Schick has 20 strikes to his name.

Second-placed Borussia Dortmund are set to visit the Opel Arena to face ninth-placed FSV Mainz 05.
Following their exit from the UEFA Europa League, Dortmund are unbeaten in their last three Bundesliga outings. Although, they have registered back-to-back draws.
Similarly, Marco Rose’s side have not lost in their past three meetings with Mainz 05, however, they are without a clean sheet in their last five games against a Mainz 05 team who are a tough nut to crack at home this term – they have lost just once at the Opel Arena this season.

FOURTH TAKES ON FIFTH
It’s fourth against fifth at the Red Bull Arena on Saturday as RasenBallsport Leipzig will play host to SC Freiburg.
Both sides who have the same number of points on the standings [40] are in similar good form.
Leipzig are on a run of four straight wins and no loss in six while Freiburg are on a winning streak of three games and are unbeaten in four.
However, Leipzig are yet to taste defeat in this fixture in the last four games.
Sixth-placed 1899 Hoffenheim – who also have 40 points on the log – will be guests of eighth-placed FC Köln.
Hoffenheim have bounced back from their bad run of form after suffering four straight losses as they are on a roll with three straight wins in their last three Bundesliga outings.
This contest against Köln gives them the chance to extend that run to four as they have been absolutely rampant in this fixture recently.
The last seven meetings between Köln and Hoffenheim have ended in a win for the latter and they are also unbeaten in 11 games against the former.

WOLFSBURG WILL LOOK TO IMPROVE HOME FORM
12th placed VfL Wolfsburg will welcome seventh-placed Union Berlin to the Volkswagen Arena on Saturday.
Wolfsburg have not been impressive at home this season, same as Union Berlin who have not been good on the road this season.
Wolfsburg have won just four of their 12 home games this season, loosing six, while Union Berlin have won just three of their 12 away games this season, loosing five.
10th placed Eintracht Frankfurt will make the trip to Olympiastadion to trade tackles with 16th placed Hertha BSC.
Both teams have been poor recently with the pair each on a run of three straight losses.
Hertha have not recorded a win in five games and are without a clean sheet in six games while Frankfurt have not found the back of the net in their last three games and conceding in each of their last four games.
However, this fixture has provided three or more goals in the past six affairs with both teams scoring in each of those games.
11th placed VfL Bochum are set to lock horns with bottom club, Greuther Fürth.

CAN BOCHUM END THEIR THREE-GAME WINLESS STREAK?
Bochum will be fancying their chances to snap their three-game winless streak against a Greuther Fürth team who have won just three games this season.
Friday night football sees 14th placed Arminia Bielefeld take on 15th placed FC Augsburg.
Both sides are separated by a place and two points on the log, meaning that a win for any would be crucial.
Although Augsburg are winless in their last three games, they have not lost to Bochum in their past seven encounters.
17th placed VfB Stuttgart and 13th placed Borussia Mönchengladbach are set to go toe-to-toe at the Mercedes Benz Arena on Saturday.
Stuttgart are yet to buy a win in their last four games and this looks like a contest between teams who love shipping in goals.
Mönchengladbach are without a clean sheet in their last 14 games while Stuttgart have conceded for seven straight games.

SPN Africa - September 18, 2020
Liverpool have completed the signing of 29-year-old Spanish midfielder Thiago Alcantara from Bayern Munich on a four-year deal valued at £20 million, rising to...

SPN Africa - November 20, 2020
The Bundesliga returns from the international break with a vengeance this weekend,with FC Bayern München, Borussia Dortmund and RB Leipzig all in action on...