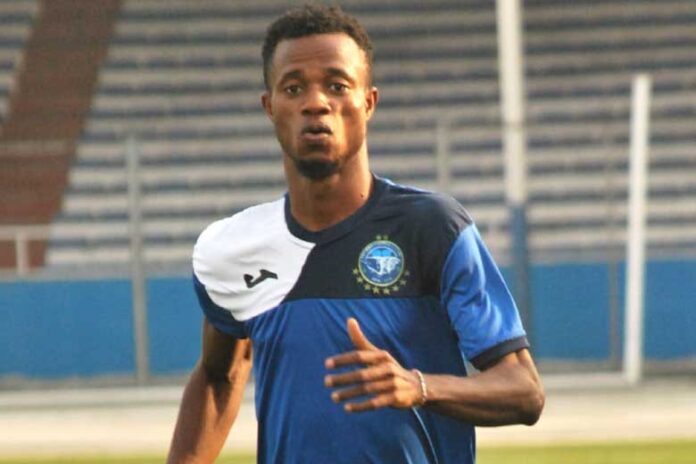 Enyimba striker, Victor Mbaoma has said that his side are well primed to pick one of the group’s tickets despite a matchday 2 defeat against South African giants, Orlando Pirates.

The two-time African champions were beaten 1-2 by the Pirates in Wednesday’s CAF Confederation Cup Group A matchday 2 clash at the Orlando Stadium in Soweto, Johannesburg.

Dean Hotto and Tshegofatso Mabasa scored for the hosts, while Enyimba captain Tunde Oladapo got the consolation for the Nigerian side.

Mbaoma said though the match was difficult he insisted that the South African opponents are beatable any day, any time.

“All hope is not lost as we stand a great chance to qualify from the group despite the defeat at Orlando Pirates.

“It was a very difficult game and against a very good team who are very, very beatable.

“We will continue to take each match as it comes, we still have over matches on the group’s calendar.

“Now this Orlando Pirates’ match is gone we have immediately shifted our focus to the next game.

“We have picked our lessons, we will work on our mistakes to ensure we get it right in the next matches.

“Our chances are quite bright, we will do our very best to pick one of the tickets to progress to the knockout stage,” said the former Remo Stars and Akwa United marksman.

The Nigerian campaigners are now second on the four-team Group A log on three points, one behind leaders, Al-Alhy Benghazi of Libya.

The People’s Elephant are contesting the group’s two tickets with the Algerian side, ES Setif, Orlando Pirates of South Africa and Libyan giants, Al-Alhy Benghazi.

The nation’s representatives will play a double header with the Algerian side, ES Setif, first on April 02 on matchday 3 in Aba, Nigeria and April 11 on matchday 4 in Setif, Algieria.