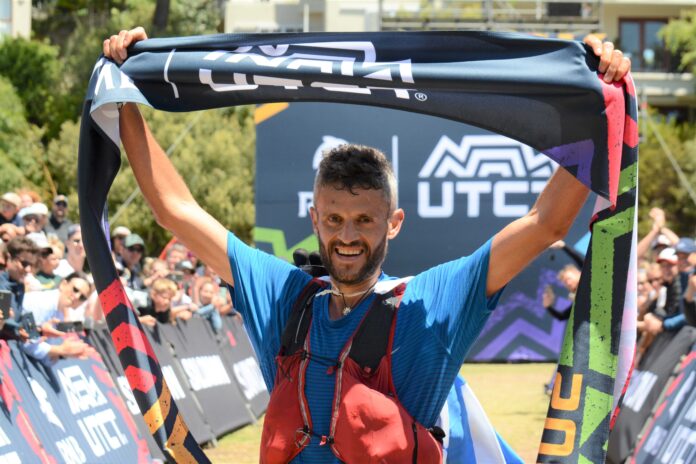 The gods on Mount Olympus are celebrating this weekend’s extraordinary performance by 40-year-old Greek ultra-distance athlete Fotis Zisimopoulos, in winning the inaugural RMB Ultra-trail Cape Town over a challenging 100-mile race around the Cape Peninsula over the weekend (25 – 27 November), while American Hilary Allen celebrated her country’s Thanksgiving Day by taking line honours in the women’s competition.

In particular, Hermes, the messenger to Zeus in Greek mythology, would have given a nod of approval to the super-natural ability shown by Zisimopoulos as he sped away from the start, looking more like a competitor in the 23km race than one taking on the longest of UTCT’s bouquet on offer.

“That’s likely just a ‘TV runner’ was the comment from the live-stream television feed. But incredibly, the ‘TV runner’ kept increasing the gap on his world-class chasing rivals, Swede Elov Olsson and Russian Aleksei Tolstenko (running as neutral) and although Tolstenko had closed to just 20 minutes at the Alphen checkpoint 22km from home, Zisimopoulos strengthened over the final section and was back at the Oranjezicht finish line in 20 hrs 48 min 17 sec, almost 40 minutes clear of Tolstenko. Olsson was a further one hour behind in third.

Zisimopoulos is an athlete in the rich tradition of Greek ultra-athletes and in particular the legendary Yiannis Kouros, who won virtually every ultra-distance race on the planet in record times two to three decades ago.  His 1984 record of 20 hrs 25 min for the 245km Spartathon was thought to be unbeatable.  No athlete had run within three hours of it until Zisimopoulos quit boxing in 2017 and took up distance running.

Now Zisimopoulos is threatening to do the unthinkable and break the Spartathlon record and his win at UTCT is an important step to achieving that. “I think that I could do it,” Zisimopoulos reflected after his win in Cape Town. “This year (in September) I came within 35 minutes of the record after I ran and extra 7km off course in a navigational error. So if I stay on the route next year then it is possible.”

“I only decided to run in Cape Town 20 days ago,” Zisimopoulos admitted. “My training had gone well after I had struggled with my breathing after the Spartathlon and I wanted to run against some of the top athletes from all over the world to see where I stood with my fitness.

“The race went well – I always like to start fast and then run my own race without worrying about other athletes in the field.  For me, running is therapy and the longer the run, the better the therapy!  The race went well, except for a tough part just before sunrise (between Simon’s Town and Kommetjie) when I had stomach problems. But that improved when the sun came up and I regained my strength to finish strongly.”

Somewhat further back, Allen was running solo in fourth position overall. She was experiencing and enjoying something of the ‘loneliness of the long-distance runner’, out of sight of other competitors for much of the race until she was overtaken in the final sector by the faster-finishing men in the 100km race.

Five years earlier Allen broke twelve bones in a 50-metre fall along an icy ridge in a Skyrace in northern Norway and was considered lucky to be alive. Doctors told her she would never run again, but they reckoned without the toughness and determination of the Colorado-based neuroscientist.

Allen has raced successfully since her accident, but never in a race so long and technical as Ultra-trail Cape Town and she wanted to put herself to this ultimate test. Once her long-time rival, joint favourite and early race leader, Dutch athlete Ragna Debats, had been forced out of the race before halfway, Allen was on her own, well clear of the three South Africans competing for second and in positions 5 to 7 overall, Nicolette Griffioen, Naomi Brand and Kerry-Ann Marshall.

That Allen was able to finish strongly and win impressively was deeply redemptive. “This race means a lot,” reflected Allen. “I have not run a race as far and technical as UTCT since my accident. So to run and win it – yeah, it rates pretty highly. In my top three together with the UTMB TDS in 2019 and the Madeira Ultra in 2021 (both following injuries).”

“After my fall my body will never be the same. And there have been subsequent related injuries – I broke my ankle and my foot last year.  So I’ve had to learn to train in different ways, especially using cross training with biking and skiing, and periodising my training.”

And Ultra-trail Cape Town proved an excellent vehicle to celebrate thanksgiving, even while she ran. “Max (her partner) brought over dehydrated mashed potatoes with stuffing to flavour and cooked that up for me on a camp stove at the aid stations. “So I got to have my thanksgiving dinner along the way – a great way to spend thanksgiving!”

Behind Allen, Cape Town physiotherapist and former Comrades and Two Oceans gold medallist, Marshall, was slowly making up ground on her faster-starting compatriots, Brand and Griffioen, moving into second position on the technically challenging section between Noordhoek and Constantia Glen.

Running consistently, Marshall closed a 1 hr 12 min gap behind Allen at Kommetjie (110km) to 52 minutes at Alphen Trail (144km) and just 44 minutes at the finish to claim second prize, with Brand taking third a further 49 minutes back.

The 100km race (UT100) has drawn athletes from all over the world in recent years to take on its challenges at the end-of-year finale and this year’s 100km was again the most competitive of the UTCT races in both male and female competitions. Just six South Africans filled the top twenty places overall.

Once last year’s runner-up and one of the strong favourites, Sebastien Spehler, had been forced out of the race, it became a two-horse contest between world-leaders Hannes Namberger of Germany and Russian athlete, Dimtri Mityaev.  Namberger held a 90 second lead running onto the beach at Llandudno (41,5km), but Mityaev, running as part of the power-packed adidas TERREX team, was 15 seconds ahead shortly before halfway at Rocket Road (47,8km).

Thereafter, there was never more than a few metres separating the leaders, both of whom were racing at the limit.  But the possibility of a second sprint finish in this ‘clash of the titans’, following Landie Greyling’s five second win over Mityaev’s teammate Kim Schreiber in the 55km the day before, was overtaken by the athletes’ respect for each other.  The pair opted not to contest the finish, crossing the line at the Gardens Tech rugby club together in triumph.

“I’ve always thought one should fight to the finish,” admitted Namberger. “I’ve never before failed to contest the finish, but somehow this was different.  It had been a genuine race, but neither of us was able to break away.  After running together for more than half the race and over five hours, it felt like the only option was to run in together.  It was as tough a race as any and not knowing how far behind Drew Holman (third placed athlete) was, we were red-lining it to the finish.”

Daniel Claasen was again the top South African, finishing fifth behind the second American, Jared Hazen, in 11:26:42, with the second South African one place and thirty minutes behind in sixth.

De Matteis’ win was not without controversy after he crossed the line with his twin, Bernard, five minutes ahead of Two Oceans Trail winner, Zimbabwean Collin Kanyimo, who had raced with the brothers for much of the contest. Having fallen behind his twin and Kanyimo, Bernard had missed a turn13 km from the finish and in so doing cut out a substantial portion of the race. While Bernard admitted his navigational error, not claiming second place, some questioned his decision to continue the race in support of his brother once he had effectively ruled himself out of the competition.

Nunige was overjoyed at her win after a difficult year and she attributed her triumph over injury-related challenges to the strong support from her adidas TERREX team.  The 48-year-old former Olympic skier raced home in an impressive 4:24:04, just three minutes ahead of talented teenager from the Southern Cape, Rebecca Kohne, with German athlete Dioni Gorla third in a close contest, just over two minutes back.

“This was a great win for me,” Nunige admitted. “It’s ended a difficult year on a high. I’m really enjoying my running and still have the desire to compete at the highest level, and I’m looking forward to next year.  It’s been a great few weeks in Cape Town.”