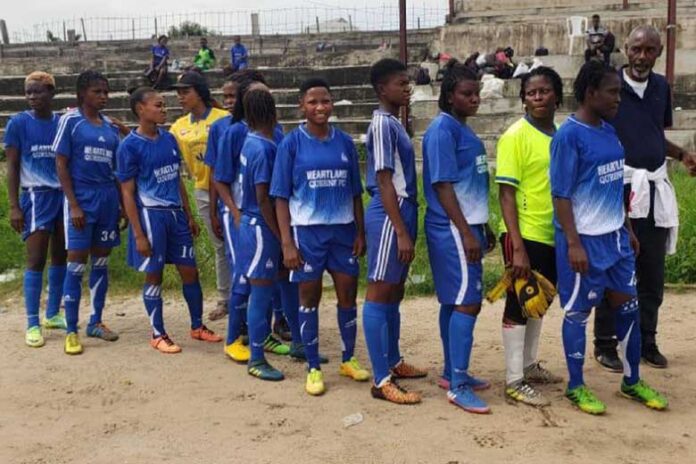 The well-deserved victory ensures that the NWFL Championship side will fly the state flag at the national finals where they will vie for the coveted diadem at the national stage with other states and Federal Capital Territory (FCT) champions.

The Nigeria Professional Football League (NPFL) side, Heartland FC will equally represent the state at the men’s national finals.

The Imo darling team led 2-0 at interval with the goals coming from the side’s attacking midfielder, Ugobest Osuji before their opposite rallied round to level scores through Chizoba Orji and Ozioma Akuneto thereby taking the match to penalty shootouts.

Heartland Queens assistant coach, Obi Ogbala said he is excited that his side despite challenges got the desired result in the FA Cup final.

“We combined experience, fitness and tactics to unsettle the opponents, Imo Angels in the tough encounter.

“I’m happy we got the desired result that will see us represent the state at the national finals.

“We were not 100% ready for the clash because early information we received was Heartland Queens are going to represent the state before the last minute change of mind to have us face Imo Angels for the sole ticket.

“We have to quickly improvise by psyching the players to go all out to achieve the desired result.

“I must commend the players for their heroism against all odds and in the face of stiff opposition.

“I’m happy we got the victory and I assure the state that Heartland Queens will be good representatives at the national final, we are not going there to add to the numbers but to challenge for the trophy.

“The team is still a work in progress, we will do everything possible to perfect every wrongs we noticed in today’s match,” said Ogbala who guided Nasarawa Amazons to win the NWFL title.

Heartland Queens are in the race to reclaim her NWFL Premiership position at the upcoming NWFL Championship. The Imo landladies will compete with five other teams, Kwara Ladies, Kaduna Queens, Gallant Queens, Naija Ratels and former Premiership side, Adamawa Queens for the two promotion tickets at the Championship tournament later in the month at the FCT, Abuja.