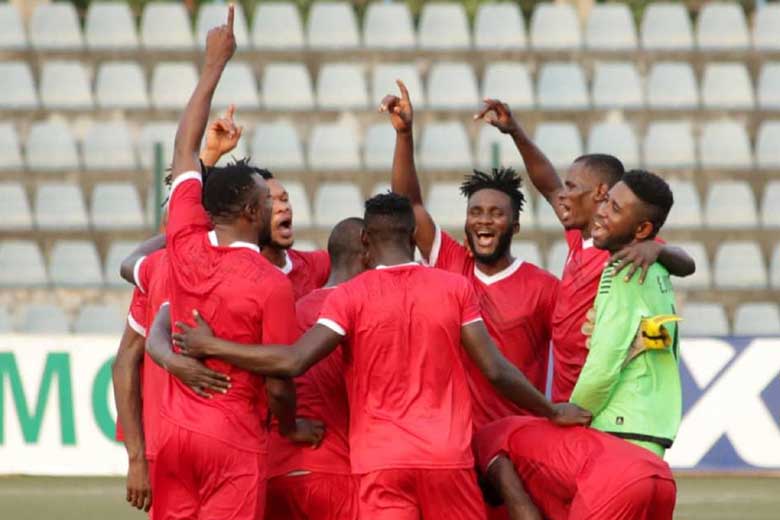 The 2020-21 Nigeria Professional Football League (NPFL) continues to be one of the toughest yet and enters matchday 22 with nine games set to be decided.
League leaders Akwa United will welcome sixth placed Rangers International to the Godswill Akpabio International Stadium.
The ‘Promise Keepers’ have amassed 40 points and Sunday’s derby win against Dakkada FC was a step in the right direction for their quest to claim Nigerian football’s biggest prize.
Rangers, on the other hand, will be looking to bounce back from their home loss to Rivers United but playing against Kennedy Boboye’s side will be a tough task.
Joint league leaders, Kano Pillars will attempt to remain in the hunt for the NPFL title when they face Northern rivals, Katsina United.
Pillars are second on the log after amassing the same number of points as Akwa United but they will face a Katsina side who are hoping to beat the drop zone.
16th placed Katsina were outstanding in their last home game as they put five past Wikki Tourists but the question will be how they can stop the ‘Sai Masu Gida’ attack which possesses the likes of Ahmed Musa, Nyima Nwagua and Rabiu Ali.
Rivers United retained fourth place after Sunday’s win at Rangers. Now they return to the Adokiye Amiesiamaka Stadium, Port Harcourt to battle Abia Warriors.
The ‘Pride of Rivers’ have been unstoppable at home this season as they have won all their home games this campaign and have a 100 per cent record.
Fifth placed Nasarawa United will play host to seventh Heartland FC of Owerri at the Lafia City Stadium.
Both Nasarawa and Heartland will be looking to build on their respective wins in the previous matchday by getting maximum points in Lafia.
Eighth placed Lobi Stars will travel to the Soccer Temple in Agege to face 13th placed MFM.
MFM recorded a valuable away victory on Sunday as they triumphed over Wolves, Olalekan Gabriel’s charges will now be looking to vanquish the threat of Lobi who also recorded a win in their last game.
Jigawa Golden Stars and Dakkada FC will trade tackles on Sunday.
Both sides registered unimpressive results in the last matchday and will be hoping to bounce back to winning ways.
Plateau United will do the honours of welcoming Wikki Tourists to Jos.
United will be looking to use the conflict in the camp of Tourists to their favour after head coach of the side, Usman Abdallah resignation, citing interference from the management of the club which the club came out to deny.
The battle to survive relegation will also be in focus.
FC Ifeanyi are placed 19th on the log after amassing 17 points and Adamawa United currently ensconced at the bottom of the log with 12 points.
The former will take on 17th placed Sunshine Stars and the latter will slug it out with 18th placed Warri Wolves who have accumulated 20 points each.
The game involving Enyimba and Kwara United due to the continental engagements of the Aba Elephants.
Fixtures.Katsina United vs Kano PillarsNasarawa United vs Heartland FCPlateau United vs Wikki TouristsRivers United vs Abia WarriorsAkwa United vs Rangers InternationalJigawa Golden Stars vs Dakkada FCFC Ifeanyi Ubah vs Sunshine StarsMFM vs Lobi StarsAdamawa United vs Warri Wolves
Enyimba vs Kwara United – Postponed

Sammy Wejinya - November 22, 2020
Former Italy coach, Cesare Prandelli has expressed his disappointment after watching Fiorentina slump to a 1-0 defeat at home to Benevento.Prandelli did not hold...