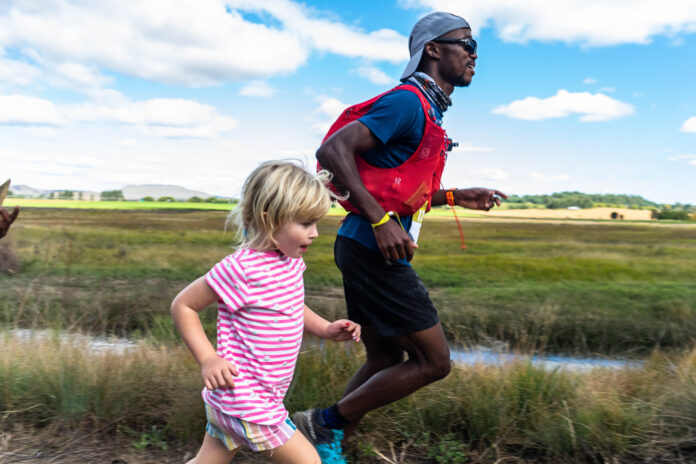 Trail runners gathered yesterday (Thursday 21 April) at the Premier Sani Pass Hotel for the fifth edition of Ultra-trail Drakensberg, looking forward to testing their physical and mental faculties to the limit on some of the most scenic and challenging trails on the continent.

Full sunshine on the verdant mountain slopes of Southern Africa’s largest mountain massif was in stark contrast to the deluge a week ago which devastated the province recently. But forecasts predict more rain tomorrow afternoon, dashing hopes of sunny dry mountain running.

Runners have come from five continents to race one of the bouquet of five ‘Berg’ trail races, ranging from 21km – 160km, offered by local farmer Spurgeon Flemington and his efficient team drawn from the Underberg farming community.

Competitors in the ‘grand-daddy’ of trail, the 100 miler, start mid-morning today near the Sani Pass border post at the highest pub in Africa, running the first 76km through the Lesotho highlands. Competitors summit the highest peak in Southern Africa – Thabana Ntlenyana at 3482 metres – before checking into the Sani Backpackers Lodge aid station and starting the night descent (for most of the field) down spectacular ridge-lines into South Africa for the remainder of the race.

Runners in the 100km race get underway from the South African border post before dawn tomorrow (Saturday) and head up the steep ascent to touch the Lesotho border before heading back into South Africa along slippery single-track paths.

The Giant Cup Uncut run over 62km (GCU62) follows the length of the popular five-day hiking trail while the 32 km Sundowner Run (SDR32) takes in the second half of the trail from Castleburn, both races finishing at race HQ at the Premier Sani Pass Hotel.

American Cody Reed has won the Ultra-trail Cape Town over both 100km and 65km and clearly enjoys racing at the Southern tip of Africa. “I decided I had to race this one when I saw the race video and I’ve been in the Drakensberg since Monday to get used to running these amazing trails,” said Arizona-based Reed.

Reed has been fighting to overcome the effects of a stomach ailment, but appears on the mend and can be expected to be strong on the trail. “I’ve been feeling pretty sick and dehydrated, but just started feeling a bit better this afternoon,” Reed said yesterday. “Hopefully the stomach co-operates but I think it’s going to be aid station to aid station for me to stay hydrated and absorb food.”

If Reed is strong favourite to take line honours in the men’s 100km, Naomi Brand is equally favoured in the women’s contest over that distance. Now living in New Zealand, Brand holds the record for the UTD 100 miler and looks forward to tackling the 100km on her return to the country of her birth.

“Ultra-trail Australia was postponed, due to flooding, giving me the opportunity to run UTD once more. I’m looking forward to it – it’s so special to be back here,” said Brand.

Another returnee to South Africa is Meg Mackenzie, nowadays based in Chamonix in the French Alps. The North Face athlete has become a well-known face amongst leading finishers in trail races around the world and will be favoured to take the honours in the 62km ahead of a strong field. Mackenzie’s former AfricanX teammate, Landie Greyling, was in good spirits on the eve of her race, looking forward a good race over testing terrain, while Addo winner, Jade Bucklow, and Hout Bay Trail champion, Kristin Heath, will also challenge strongly for podium places.

Big name trailers of the likes of Johardt van Heerden, Daniel Claassen, Eric Ngubane and Thabang Madiba will ensure strong competition in the GCU62, with Van Heerden, tough to beat on the trails in South Africa for the past two years, the favourite to take line honours.

The SDR32 and the Half Marathon have also attracted a sprinkling of top-quality athletes and will add to the feast of running afforded by the 2022 Ultra-trail Drakensberg.