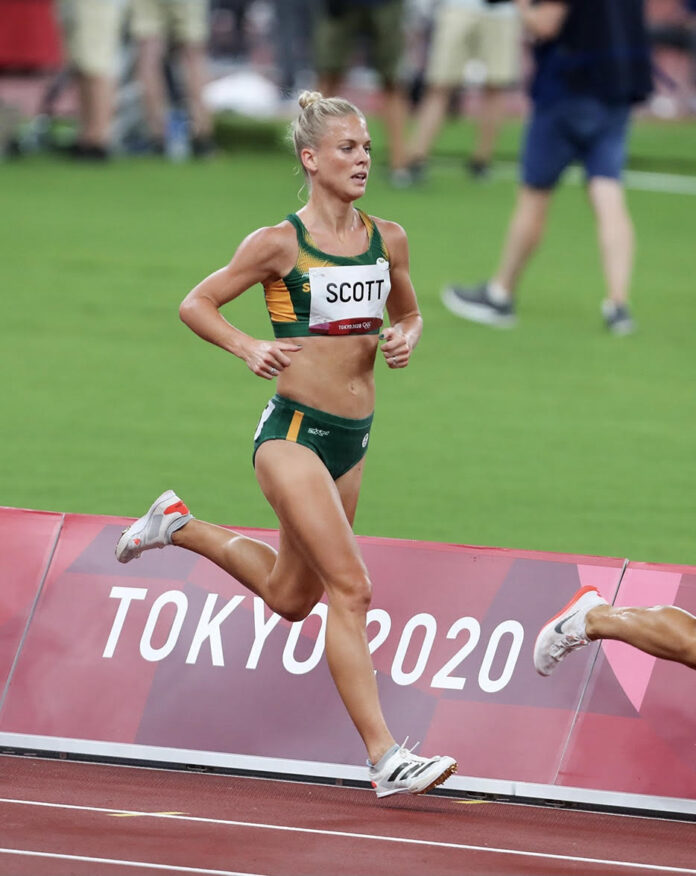 The Two Oceans Marathon has been run and all eyes turn now to Green Point, just 7km from the finish of the Two Oceans, where the Athletics South Africa Track and Field Championships take place from tomorrow (Thursday 21 April) this week. One of the best races of the competition will undoubtedly be the women’s 5000m, where many of South Africa’s best athletes of all time go head to head.  Favourite for the title, Dominique Scott, arrived at her parents’ home in Constantia last week from her base in Boulder, Colorado in the USA.

Scott has represented South Africa in the last two Olympic Games in Rio and Tokyo and has been in the form of her life this year, setting personal bests for 10 000m on the track and for 10km and the half marathon on the road.

Also in April, but thirty-one years ago, Dom’s mother Renée Scott enjoyed one of the highlights of her own athletics’ career, setting a South African record for the Olympic-standard swim triathlon of 2 hrs 07 min 50 sec in stormy weather at Gordon’s Bay, and mom will be a passionate spectator at the 5000m tomorrow. Will ‘Scott lightning’ strike twice in the same month, in the same metro but 31 years apart?

Scott was beaten by Caster Semenya in Pretoria in the 2019 Championship 5000m – the last time the national track and field competition was held – and Semenya will again be in the field tomorrow, in an attempt to take the title and qualify for the World Championships in July.

Also in the field will be leading road athlete, Glenrose Xaba, coached by Semenya, the talented 20-year-old Durban athlete, Tayla Kavanagh, and the Van Graan sisters, Kyla and Aynslee, all athletes within the top 15 of all time in South Africa, making up a mouth-watering contest at the highest level.

While Scott married American Cameron Efurd in 2015 and is currently based in Colorado, she remains true to her South African origins and chooses to compete internationally for the country of her birth. “I’m so proud to have become an Olympian from the Southern Suburbs (of Cape Town),” Scott emphasises. “Even though there were few opportunities for athletics in Southern Suburbs schools, I really pursued the sport and finished my schooling at Rhenish High School in Stellenbosch in order to achieve my best results.

“Apart from my mom and dad, my coach Johan Fourie (former track great) made a huge impact on my career and helped me to reach the times which earned me a sports scholarship at Arkansas University.”

Scott arrived home in time for the Two Oceans Marathon and was tempted to race the half marathon. “My whole family ran the half marathon, so it was tempting,” Scott admitted. “But I’ve only ever run two half marathons and trained just for one, so I thought I should rather keep myself fresh for the 5000 metres and an international 10km in Germany the following weekend.”

But Scott was determined to join the party and joined her sister Natasha for part of the race, including up the testing climb up Southern Cross Drive, helping her to achieve her personal best time of 1:33:35 – ten minutes quicker than mom Renee.

Scott has been part of the global adidas team for several years and remains loyal to the brand. “They’ve been good to me and are a very supportive brand. Each year their distance running athletes are invited to take part in a high-profile event at the adidas headquarters at Herzogenaurach in Germany to run 5km, 10km or the half marathon, running in their latest shoes and gear and hopefully racing to new best times.”

Scott feels her best distance will ultimately be the marathon and if her 67:32 half marathon, which she ran in Houston, USA, in January and is just 48 seconds off Van Zyl’s national best (the world record at the time), is anything to go by, she has a great future on the road.  “I’m looking to race a marathon in the next year or two,” admitted Scott.

“These days, women are peaking in their thirties in marathon running – even late in their thirties – so I think I’m almost ready to venture into that territory!  I think the roads suit me much better than the track.”

Scott has already qualified for the World Championships in Oregon in July for both the 5 000m and 10 000m but is only required to compete in a single event at the ASA Track Championships in order to cement her place in the side.

The Scott-Semenya head to head in the 5 000m (16h35 Thursday 21 April) is likely to be a thriller. A fast pace from the start will play to Scott’s strengths, while a slower tactical race will suit Semenya, as was the case in 2019.

“It’s been great to be back in Cape Town for a few weeks and I’m looking forward to racing at Green Point this week,” Scott said. “I’ve read about the big track and field  in Cape Town in the past, when Green Point Stadium was packed with spectators and I’m hoping that we might return to those heady days.  ASA’s Jean Verster and Hezekiel Sepeng are doing a great job in getting track back to a top sport so I invite everyone to come out and enjoy the action.”