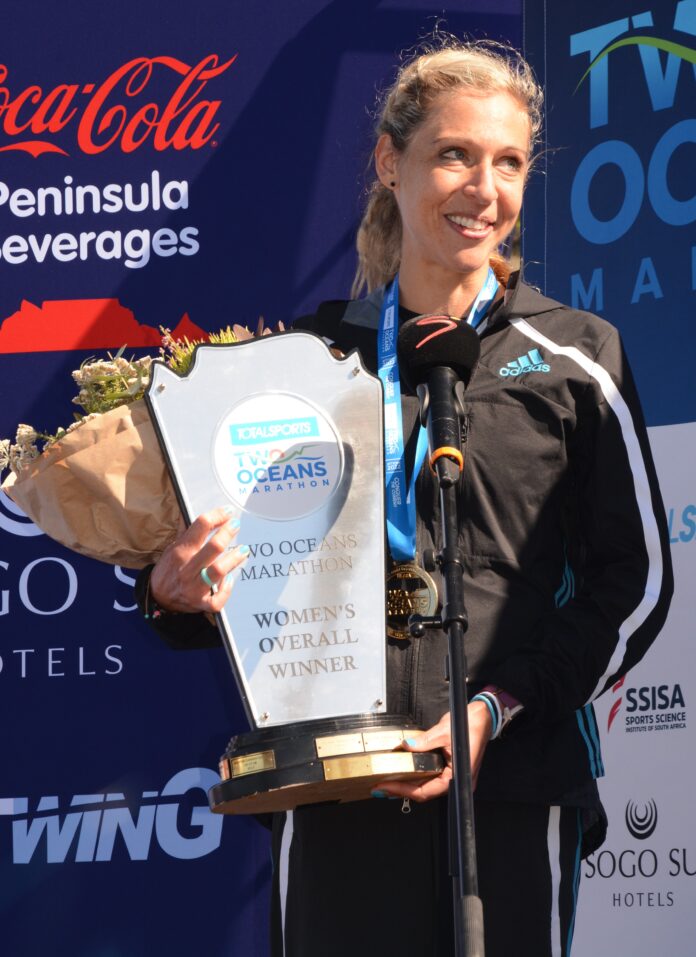 Occasionally record performances happen which are so far ahead of their time they seem destined to last forever. Bob Beamon’s unbelievable 8,90m long jump in Mexico was one – it stood unbeaten for 23 years before Mike Powell added 5cm to the mark. And Ukranian, Sergey Bubka’s, last pole vault record of 6.14m lasted twenty years.

They were right – practically. In running parlance, thirty-three years is as good as ‘never’.  Understandably, when South Africa marathoner extraordinaire, Gerda Steyn, finally succeeded in running her dream and taking the women’s mark at ‘Oceans’ to below the 3 hr 30 min barrier this Easter, social media (which had never even been imagined when Frith ran her time) went crazy.

In truth, notice had been given three years ago that Steyn’s presence at Two Oceans was putting Van der Merwe’s, Two Oceans mark at risk. Steyn ran to within 53 seconds of Van der Merwe’s record in winning her second title in 2019 and even had time to pause before the finish to acknowledge the fans’ enthusiastic support.

The ingredients for an ‘Oceans’ record attempt were coming together. Blend those two exceptional distance athletes into a Two Oceans Ultra-marathon race, find a weather magician to conjour near-perfect conditions and add strong competition to keep the pace warm from the start and you have a mouth-watering recipe for distance-running fireworks.

And that’s precisely what was cooked up this Easter, with spectacular results. After Ethiopian Amelework Bosho and Kenyan Shelmith Miriuki had raced through half-way in 1:41:54, 46 seconds clear of the South African pair, Van der Merwe’s record, set in an amateur era, had little chance of surviving and was duly plundered, with Steyn racing home in 3:29:42 and Van Zyl also dipping below the mark, clocking 3:30:31.

An exhausted Bosho pushed herself to the limit after surrendering her lead, eventually crashing over the finish line in third, five minutes behind Steyn, with Muriuki a minute further back in fourth.

Steyn, 32, was not yet born when Van der Merwe ran her exceptional records for the Two Oceans and Comrades (down run) Marathons but she regards the Benoni wonder woman as one of her heroes. “Frith provided huge inspiration for me in my career – she’s been one of my role models to look up to,” admitted Steyn.

Although she was late into the sport of distance running, Steyn was exposed to the Two Oceans Marathon from an early age. “Gerda was just three years old when I took her with me to Kirstenbosch,” related her aunt, Sanet Steyn. “She was in sandals but still walked with me up Skeleton Gorge. While we were climbing the gorge, a group of young people were coming down, dressed in running gear. They had run the Two Oceans the day before and I think made quite an impression on Gerda!”

Now enjoying her position as an English teacher at St Francis College in Benoni, Van der Merwe still has wonderful memories of her few years as an elite marathon and ultra-marathon runner, and had mixed emotions about hearing the news.

“I had assumed she would be going for the record and thought it would likely go,” said Van der Merwe. “She’s been in great shape. And I always said it would take an athlete who had run faster than my standard marathon time to break it.  And Gerda now has run 2 hrs 25 min for the standard marathon– two minutes inside my best time.

“I’m pleased the record went to a South African. After 33 years it had become a part of me and I guess I’m a bit sad it’s gone.  But I’m very happy for her. Next will be my Comrades down record in August – she can break that one as well.

“When I raced there was hardly any prize money, and none at all at Comrades, but I was really excited at Two Oceans in 1989 as I won a car – I remember it was an Opel Monza!

“I was also teaching at the time, and I think that this helped me lead a more balanced life and my running was better for it. Although even with that mix, I over-did the running and paid the price with injuries.

“I’m pleased that Gerda broke it by a lot rather than just by a second or two. I’ve sent her some messages of encouragement. She’s a humble person and will go far. Those with big ego’s always get found out!”

Van der Merwe still enjoys running most days, but over shorter distances and slower in pace than in years gone by. “I enjoy some of the Park Runs and the furthest I’ve run in the last few years is around 13km. Running keeps me healthy and gets my mind right – I can’t do without it!”

In addition to teaching English, Van der Merwe also takes charge of school athletics and has also recently been given the task for running the Eisteddfod. “I think running took me out of my natural shyness – I was forced to do interviews!  Bruce (Fordyce) suggested that I take a speech course, which I did!”

Fordyce himself was on hand to witness Steyn’s record – he was on the television commentary team and admitted that they had ‘given’ the race to Irvette van Zyl when she crested Constantia Nek with a useful lead and running strongly. “But Gerda never gave up – and suddenly we saw her appear on the screen again not too far behind Irvette. She really dug deep and is something special.

“We’re world class in ultra-distance running in South Africa and Gerda’s among the best,” Fordyce remarked. “Her timing was perfect today – I think she learnt from the Cape Town Marathon, where she did all the work up front only for the Kenyan and Ethiopian athletes to come through towards the end and take the honours. Today was different.”

Another of South Africa’s all time running greats agreed. “Gerda had a brilliant run today,” said Elana van Zyl. “It was well-timed and perfectly executed!  It’s much easier to get to the top than to stay there and keep delivering to expectations (which is what Steyn did)”.