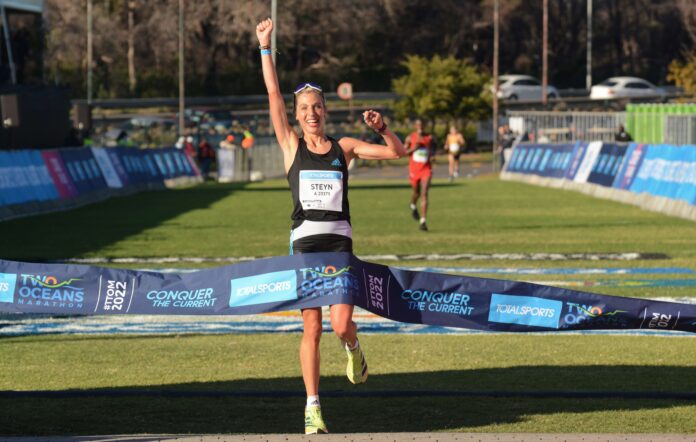 In one of South Africa’s all-time great foot-races, Gerda Steyn did what many thought could never be done, breaking a 33-year-old record in her third successive victory in the 56km Totalsports Two Oceans Marathon in Cape Town on Easter Sunday.

And in the closest finish in the 51-year history of the event, Ethiopian Edndale Belachew ran a sensational debut to explode the myth about Ethiopians and the Two Oceans, outsprinting South African distance running star, Nkosikhona Mhlakwana, in the final 100 metres to win a thrilling race. Belachew became the first Ethiopian to win the Cape’s great 56km race, clocking 3:09:05, the second-fastest winning time since 2014.

Thirty-three years after Frith van der Merwe raced across the finish line at Brookside in Claremont in 22nd position overall to clock 3 hrs 30 min 36 sec and set a time they said would never be beaten, Steyn did just that, clocking 3:29:42 and finishing 54 seconds inside Van der Merwe’s record – virtually the same margin by which she missed the mark in her last attempt in 2019.

And while Van der Merwe won the 1989 race by the staggering margin of 34 minutes over Helen Lucre, less than a minute separated Steyn from second-placed Irvette van Zyl, who also finished inside the old mark – by just 5 seconds – making the 2022 race one which will stand for all time in the portals of the Two Oceans history.

Steyn had to overcome a full-on head cold in the run-up to the race, the pressure of expectancy, a world-class field (which included leading east African athletes and her Tokyo Olympics teammate, Van Zyl) and some desperate ‘dark’ patches during the race, but stepped up to the plate in no uncertain terms to seal her place in history.

“Since missing Frith’s record by less than a minute in 2019, I’ve often dreamed about running onto the UCT fields in sight of the record,” Steyn reflected. “And when I ran onto the grass at the finish and the clock had just turned 3:29 I realised I was living my dream in that moment and couldn’t help smiling!

“I’m overjoyed but also humbled when I think of all the people who have supported me and enabled me to race for the record. When I got to the start line, I realised that it was not just about me, but about so many people along my journey.”

Remarkably, no male or female athlete from Ethiopia had ever won the Two Oceans, but 2 hrs 10 min marathoner Belachew changed that in his first race beyond the standard marathon distance. Always looking composed and in control, the tall Ethiopian, running in the colours of the Maxed Elite Club, snatched victory away from the 27-year-old Mhlakwana, whose time will almost certainly come.

“Hallelujah,” cried Belachew aloud in an Easter greeting as he crossed the finish line for victory. “I’m incredibly happy to have won today.  Due to the Corona virus I was not getting opportunity for racing. This is my first race since the COVID lockdown, so I’m very pleased to have been given the chance to run in this beautiful race at Two Oceans.

“I ran somewhat conservatively, always keeping a little extra in case I needed it and it served me well at the finish!  I received amazing support from the people of Cape Town both before and during the race.”

A measure of consolation for Mhlakwana, is that his second-placed finish within three seconds of Belachew, eclipsed by one second the previous closest Two Oceans finish, when Siphiwe Gqele outsprinted British runner, Warwick Ewers, by four seconds in 1983 to win the first of his three victories in 3:11:54. Five seconds separated Zithulele Sinqe and Russian Dimitri Grishine in 1996 and six seconds was the gap between legendary athlete from Lesotho, Vincent Rakabaele and Allan Robb in 1976 and also between Phineas Makaba (3:15:06) and Zambia Dlayeni in 1994.

Running in the colours of his new club, Holywood Bets, ‘Caster’ as Mhlakwana is known to his teammate, covered every break after he moved up from a cautious start to join the party at the front of the chasing pack in Hout Bay.

Known for his Comrades ‘disaster’ in 2019 when severe muscle cramps dropped him from 9th to 11th and out of the gold medals within touching distance of the finish line, Mhlakwana looked every inch a world-beater at the ultra-distance. He moved with the decisive break on Constantia Nek and stayed the pace with Belachew to the finish, as the leaders dropped one by one.

Trained by Comrades gold medallist and Ultra-trail Cape Town winner, Prodigal Khumalo, the Howick-based Mhlakwana has excelled both on road and trail in recent years, but three-times Comrades champion and defending Two Oceans champion, Bongmusa Mthembu, who placed a solid fourth today, believes Mhlakwana must be more focused on a single goal to really excel. “I think he can become a great ultra-distance athlete and if he choses Two Oceans and Comrades as his priority goals.”

The fireworks show started early, as unheralded Phantane athlete, Anele Dlamini, took off at great pace, building to an unprecedented seven and a half minute lead at the half way mark, after he flew through 10km under 29 minutes and half way in an incredible 63 minutes.

The pace was suicidal and the end inevitable and 2 hrs 11 min 30 sec and 40km into the race Dlamini’s incredible morning came to an abrupt halt through the Hout Bay stretch named ‘the graveyard’.  Still leading the race, he stopped, took off his shirt and acknowledged Kenyan runner Bernard Chirchir as he flew past into the lead, racing through the marathon mark in 2:21:06 – 90 seconds clear of the chasing pack.

Looking to become the third Kenyan to win Two Oceans following the success of his compatriots John Wachira (2009) and Justin Chesire (2018), Chirchir had chased hard, but still held a minute lead over Constantia Nek. Earlier, five athletes – Belachew, Mhlakwana, Sikhakane , Kenyan Jonathan Chiyoka and another South African debutant, Onalenna Khonkhobe – had broken clear on Constantia Nek but only three – Belachew, Mhalkwana and Khonkhobe – were together as the athletes crested the high point of the race.

Trained by former Two Oceans gold medallist, Pio Mpolokeng, Khonkhobe was one of the dark horses in the race, tipped by some for a surprise win which looked possible as the young athlete from the North West Province sped into the lead following a fall at a refreshment table. His charge proved too fast and too soon, with Belachew and Mhlakwana swooping past from the top gate of Kirstenbosch 6km from the finish.

The pair raced stride for stride to set up a thrilling finish which will likely be viewed multiple times on the television highlights packages in the coming week.

Another Ethiopian, Amelework Bosho, who had won the Nedbank Runified 50km in Gqeberha last month, and Kenyan Shelmith Muriuki, who was second in that race, had broken clear of Steyn and Van Zyl after the half marathon mark in Fish Hoek and the east Africans held a 46 lead at the half-way mark at the start of the climb up Chapman’s Peak.

Bosho took the solo lead up the climb to Constantia Nek, but relinquished it to a strong-climbing Van Zyl, who looked a winner as she crested the high-point running strongly.  But Steyn, who moved into second shortly before the summit, set off in pursuit closely followed by Muriuki.  The four leading women were all in contention for a record-breaking victory in the final 10km in an intense battle for supremacy.

Steyn had now moved into top gear and she flew past a startled Van Zyl shortly before the traffic lights at the final turn towards the finish less than 3km from home.  Racing hard, Steyn’s pace was relentless and the record powerless to withstand her charge as she raced to her dream victory.