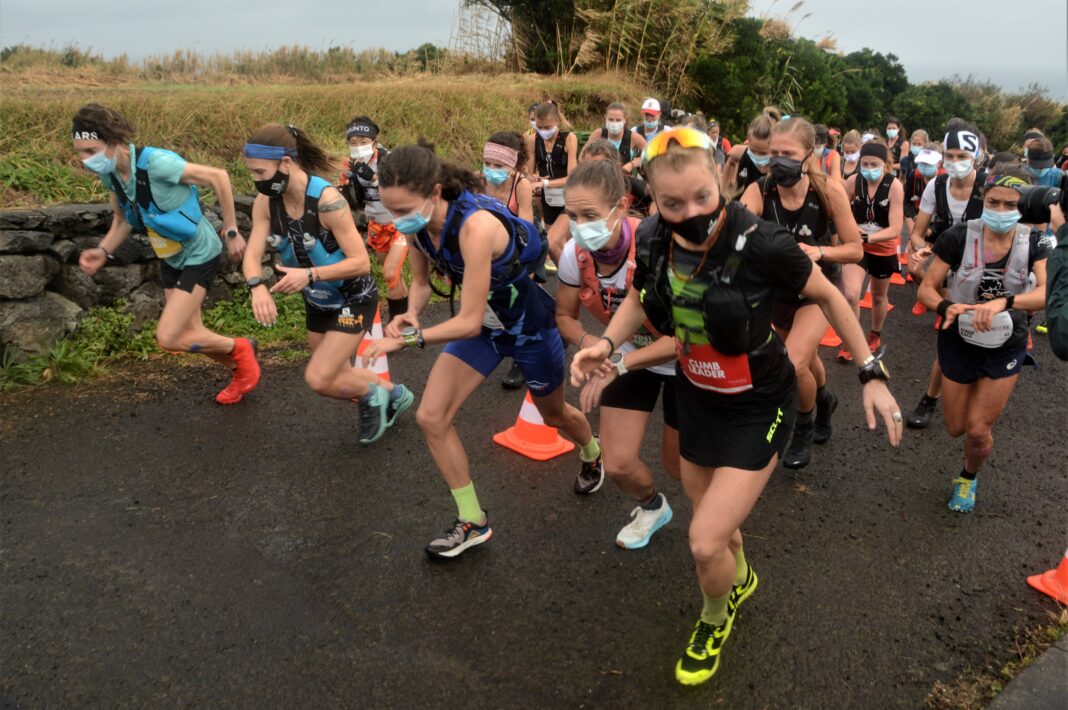 Rain is regarded as an African blessing so the weather may have been tipping a cap to the region where the sport of trail running originated centuries ago, on Thursday (October 29) as the Golden Trail Championship kicked off in earnest on The Azores.

After four days of sunshine – rare at this time of year – the heavens opened for Day One of the four-day stage race, a course challenging enough in dry conditions tricky and treacherous in the rain. The first day of the main event saw runners line up on the Azorean Island of Faial in the mid-Atlantic, to take on a course that was everything Golden Trail founder, Greg Vollet, could have hoped for.

Trail running is at its best when the elements are as challenging as they were on Thursday, with winds gusting up to 70 km per hour on top of the volcanic caldera in the centre of the island, which the athletes summited shortly before the half way mark in the race. And while the cloudburst occurred after most runners had completed the race, there was enough rain to turn the trail into a mud-bath for stretches of the race.

Few escaped without a fall or two and several incurred injuries which could rule them out of further participation in the championship. The testing course and variety of gradient and terrain played to the strengths of those skilled in orienteering, and it came as no surprise that both of Thursday’s winners are superb trail athletes as well as orienteering champions.

French athlete Frederic Tranchand held off a strong challenge from Polish trail athlete Bartlomiej Przedwojewski (winner of the Otter African Trail in record time in 2018) to earn the ‘yellow bib’ for the fastest overall in the championship, taking it from Swiss athlete, Joey Hadorn, who won yesterday’s short section prologue.

Moroccan athlete Elhousine ‘Hassan’ Elazzaoui had an excellent outing on terrain not best suited to his skills, narrowly holding off Norwegian’s Stian Angermund-Vik to complete the podium, four minutes adrift of the top two.

Super-Swede and ten times world orienteering champion, Tove Alexanderrson, came through the field after starting at the back of the pack, to smash the course and her rivals, finishing almost seven minutes ahead of Swiss athlete and prologue winner, Maude Mathys.

While Tranchand and Alexandersson would score full marks for commitment, they could be marked down for strategy for a four day event. Both suffered falls while speeding along slippery routes, which could impact on their chances of winning on Day Four or worse, not making it to the start line tomorrow.

“I always strap my ankle to stablise it, as I find I turn it over a lot in orienteering,” admitted Alexandersson. “It’s a bit stiff, but I’m hopeful that I will be at the start tomorrow.”

Unable to run the prologue, as the results of her second COVID test were not available until last night, the Swede had to start at the back of the pack, but soon made up ground on the climb and was lying fourth after 5km behind a fast-starting Mathys, current world champion, Blandine L’Hirondel (France) and American Rachel Drake.

Alexandersson took the lead from Mathys on the technical section through s forest on the final ascent to the caldera and ended with almost a five minute advantage over Mathys, winning in 2 hr 10 min 00 sec. L’Hirondel took third in 2:18:11.

South Africa’s Meg Mackenzie ran a disciplined race, holding back in light of the challenges to come. “I was very controlled today – perhaps too much (Mackenzie finished 26th), but I have tons of time to make up for it!”

Tranchand was content to bide his time on the ascent before taking the lead from his Polish rival shortly before the summit.  The two ran together for much of the second half and it needed an orienteering skill to decide the race.

“Bartlomiej was running just ahead and missed a marked turn, which gave me the chance to take the lead and open a gap,” said Tranchand. “Although he only went a few metres off course, it proved enough for me to run to win today. I think my training to observe small details helped me to stay on course!”

A natural high… trail running offers a way out, for this runner.

A farmer started an ultra-trail race…

Sammy Wejinya - April 26, 2020
The postponed 2020 London Marathon could be staged with elite athletes only according to race director Hugh Brasher.Brasher said that was one of 10...

Stephen Granger - May 6, 2020
The Sanlam Cape Town Marathon 2020 will go ahead and will host runners from all corners of the planet, according to the organisers -...

Stephen Granger - June 3, 2020
Whenever Eliud Kipchoge runs, the world takes notice, affording the Kenyan athlete similar status to that given to Roger Bannister after the English doctor...

Stephen Granger - October 24, 2020
The participation of some of the greatest athletes of all time in this year’s Sanlam Virtual Cape Town Marathon has created an opportunity for...