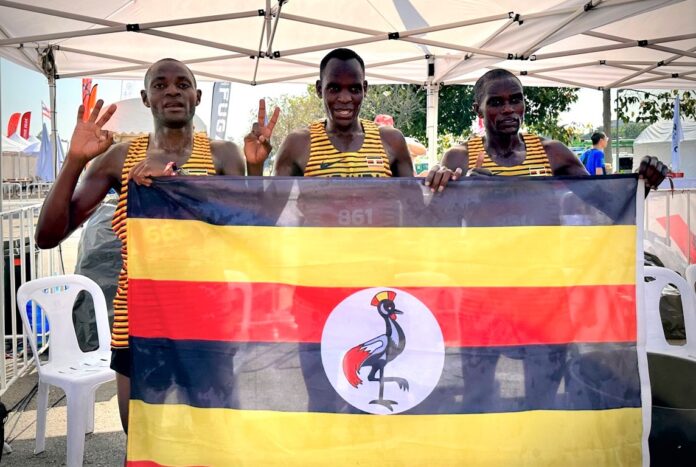 Ugandan athletes reigned supreme in the mountain running ‘Up and Down’ race on the final day (Sunday 6 November) of the World Trail and Mountain Running Championships at the Thailand resort of Chiang Mai, taking top honours in both the men’s and women’s races.

The historic event marked the first occasion where trail and mountain running competitions had been combined at a World Championship level and the first occasion the event was held in association with World Athletics, the governing body of world athletics which accepted trail running as their newest discipline three years ago.

While temperatures and humidity were higher than many experience in Europe or America, fears that athletes would struggle to compete in the conditions proved unfounded as leading athletes from almost fifty countries competed in five events over three days in a celebration of the sport which was given the thumbs up from organisers, officials and athletes.

The ‘Up and Down’ mountain running event was held over a 10,7km course with an initial 475m ascent to the halfway mark before a sharp descent to the finish.  Communication problems led to the Ugandan team missing the initial ‘Uphill’ mountain running race on Friday, which was dominated by their Kenyan neighbours, but they more than made up for it yesterday, dominating both men’s and women’s competitions.

Ugandan athlete Samuel Kibet held off Kenyan Patrick Kipngeno in the men’s ‘up and down’ race to win by just 10 seconds in 40:02, with three Ugandans, Timothy Toroitich, Leonard Chemonges and Eliud Cherop, following close behind in positions third to fifth. Spanish athlete, Andreu Blanes, who had narrowly beaten the Africans at Sierra Zinal 31km in Switzerland in August, placed sixth. Uganda took gold in the team competition with Spain winning team silver.

Ugandan Rebecca Cheptegei was in a class of her own in the women’s race, winning by almost 30 seconds ahead of her compatriot, Anne Chemengich, with top American Allie McLaughlin, who was unbeaten at the Golden Trail World Series Grand Final on Madeira just a week earlier, trailing in third. With two Ugandans forced to withdraw from the race, Switzerland claimed the team gold ahead of Great Britain, spearheaded by the formidable duo of Judith Wyder and Maude Mathys.

Kipngeno’s runners-up position to Kibet earned him his second individual mountain running medal yesterday, following his emphatic win in the ‘uphill’ race on Friday ahead of his teammate Philemon Kiriago. The lack of a third Kenyan in Friday’s race handed the team gold to Italy.

In the absence of the Ugandans, McLaughlin was unstoppable in Friday’s ‘uphill’ race on Friday, winning by 26 seconds ahead of Austria’s Andrea Mayr. Mathys placed third.

The two trail running championship races took place on Saturday, with the latest ultra-distance maestro from the USA, Adam Peterman, proving his class and versatility, winning his sixth ulra-trail race in succession ahead of consistent French athlete, Nicolas Martin and Italian Andreas Reiterer, in the 80km race.

Peterman broke from Martin shortly before the halfway mark and gradually opened a gap which grew to 13 minutes before he crossed the finish line in 7:15:53. Martin and Reiterer, who have both been prominent at Ultra-trail Cape Town in recent years, took silver and bronze respectively.

Pleased as he was at his individual win, Peterman was over the moon at his team’s success in winning gold.  “It’s the perfect end of year for me for me. Couldn’t ask for more. It was especially super-cool to take the team gold. Honestly, we didn’t expect it, but although we appeared to have a rag-tag casual approach and were not dressed smartly like the French and Spanish teams, we all worked really hard during the race. In the end, we really cared about the team title.  I hadn’t really hung out with those guys before but I’m going to miss them.”

And the sight of top French ultra-distance athlete, Blandine L’hirondel, embracing teammates Audrey Tanguy and Marion Delsepierre, who finished joint sixth, as they lay exhausted on the tarmac at the finish told a similar story. L’hirondel’s stellar performance up front to defend her world title, beating Swedish athlete Ida Nilsson by 12 minutes, contributed heavily to their team gold, and she was elated at their result.

“Our sport is mostly about individual performance and this is the only time we can be on a team with our fellow country runners,” L’hirondel said. “We formed a very beautiful team and I’m very proud.”

The positive emotions were also in evidence at the highly competitive 40km championship, won by Norwegian Stian Angermund and Romanian Denise Dragomir.  Angermund won convincingly over top contenders, Francesco Puppi of Italy and Jonathan Albon of Great Britain, while Dragomir was too strong for Czech athlete Barbora Macurova and Swede Emilia Brangefält.

“This is a dream come true,” said Angermund, one of the world’s leading marathon-distance trail athletes in recent years. “This is the second time in my running career I have cried after a finish. The first time was at the Skyrunning Championship in 2016. It is because this means a lot to me.

“Series such as the Golden Series comprise several races but is really known just to those inside the trail running community. A world championship is something that everyone can understand.  Athletes train specifically for this event over time, and they spend many days running the course to be prepared for this single race. The level of competition may be one of the highest levels of any event in the year.”

American Zach Miller, one of the most colourful and talented ultra-trail athletes in the past decade, was content to simply be a participant in the championships, opting to race the shorter distance 40km rather than the 80km, closer to his speciality. He echoed the sentiment supporting the importance of the championship event.

“I think the World Championships are really great – like a family reunion of the sport of runners from all over the world. I really enjoy this atmosphere and would love to see this event get even bigger, more representative and become more competitive,” said Miller in response to a question about the involvement of athlete from Africa in all championship events.

Technically, the World Championships in Thailand were the 2021 edition, delayed a year due to the COVID pandemic. As a result, the next World Mountain and Trail Running World Championship is scheduled to take place in Innsbruck, Austria, in June next year, in the hope that the vision of a greater spread of competing countries, and African nations in particular, will be realized.

“Some countries are taking a new interest (in participating in the World Championships) because of the new structure of the Championship,” said Alessio Punzi, World Athletics representative at the event. “Financially, World Athletics and partners have been helping to support athletes getting to the championships. In Innsbruck we hope for an even higher number of athletes and wider spread of medals.”

2022 World Mountain Running Championships Up and Down Men’s Results

2022 World Mountain Running Championships Up and Down Women’s Results