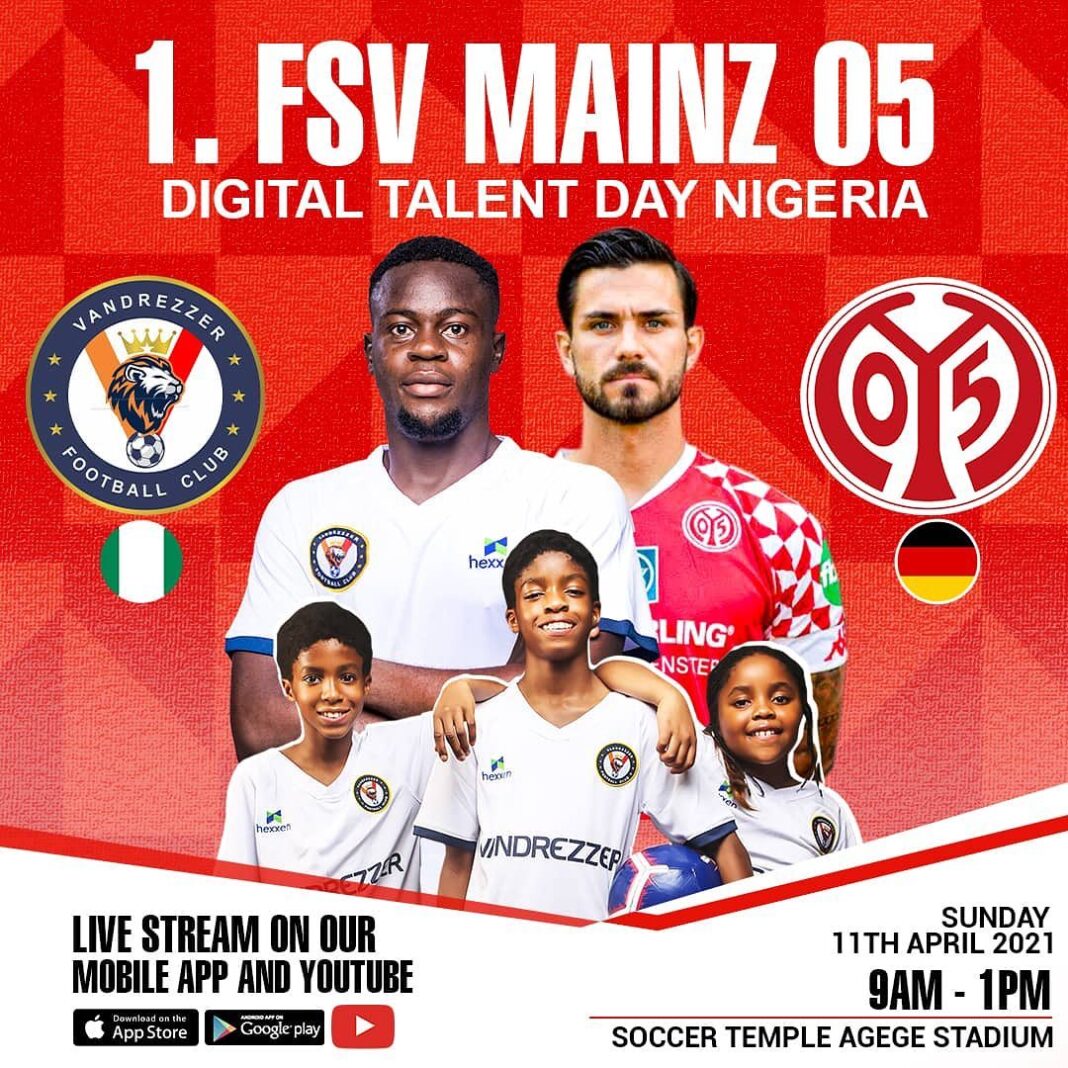 Vandrezzer FC will be the official Nigerian partner of Bundesliga giants 1.FSV Mainz 05 in their Digital Talent Day to be held on Sunday April 11, 2021 simultaneously at Mainz Stadium, the Opel Arena and at Vandrezzer’s home ground of Soccer Temple, Agege Stadium.

The international activation event, which kicks-off at 09:00 Nigerian and 10:00 German time places a spotlight on Mainz 05,  with the emphasis on reaching out to young players in Nigeria.

Mainz 05 has a connection with Nigeria in that three Nigerian international players have featured for the club – Anthony Ujah, Leon Balogun and Taiwo Awoniyi.

Football freestyle with renowned German freestyler Samuel Berger will also feature, plus other side attractions like shout-outs from 05 players to Nigerian football fans.

Karnekpe is a very well known Youth Coach at the academy of Mainz 05. He is of Ethiopian descent and has been with the Mainz Academy for two years. Before Mainz he was divisional youth director of the big German traditional club, Kickers Offenbach.

Christof Babatz is a legend at the club, is the current U19 assistant coach, was the first ever goal scorer for Mainz 05 and played 90 Bundesliga Games for Mainz 05, Hannover 96 and Hamburger SV.

From the Nigerian arm, there’ll be a parade of U-14 players showing off their ball work, while the youngest Vandrezzer FC squad, will be led by academy coach and former Nigeria International Defender,  Andrew Uwe, who played and cut his coaching teeth in Germany.

The event is also planned as a prelude to Sunday’s Week 28 Bundesliga game between Mainz 05 and FC Koln, taking place by 17:00 GMT at RheinEnergieStadion, Cologne, Germany.

The Digital Talent Day partnership with Mainz 05 is the first in a series of alliances with the German club, as VFC continues the drive of being a global brand and is produced by Schachter Sports in partnership with Vandyke Sports and Sports Network Africa

SPN Africa - August 19, 2020
Bayern Munich continued their impressive Uefa Champions League campaign with a 3-0 over Lyon to book what is an incredible 11th appearance in...

Sammy Wejinya - April 27, 2021
Bayern Munich have announced that Julian Nagelsmann will become their new manager and will replace Hansi Flick at the end of the season. The Bundesliga...