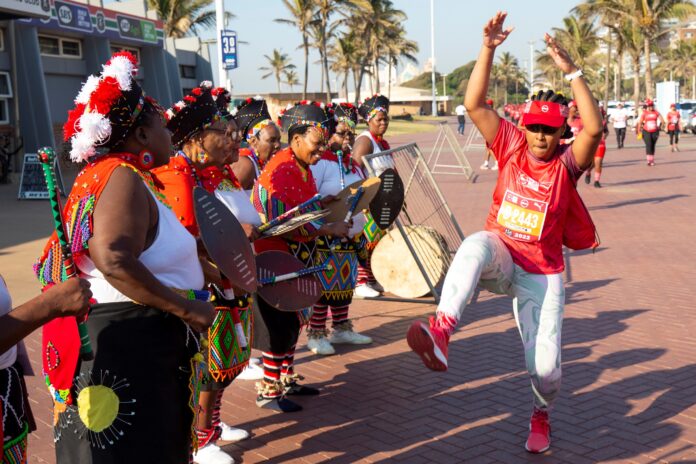 Bridesmaids in Cape Town last month, Kenyans Isaac Kipkemboi and Jesca Chelangat were the stars of the show in Durban this morning (Sunday 10 July), as they swept to impressive victories in the Absa RUN YOUR CITY DURBAN 10km, making use of perfect running conditions and posting personal best times in the process.

Second to Daniel Ebenyo (Kenya) and Stella Chesang (Uganda) in the series opener in the Mother City last month, Kipkemboi and Chelangat were determined to reach the top of the podium in Durban, and they achieved that in no uncertain terms. Kipkemboi’s winning 27min 37sec was just 9 seconds outside the great Ugandan Joshua Cheptegai’s South African all-comers record, set in Durban five years ago, while Chelengat posted a women’s all-comers 10km record, her 30:41 beating Ugandan Stella Chesang’s time set in Durban last year by 14 seconds.

Chesang won in Cape Town in 30:40, but because of the point-to-point nature of the course, the time will not be recognized for record purposes.

Four times faster than 28 minutes is rare anywhere in the world, but that’s what Absa RUN YOUR CITY DURBAN delivered, with no fewer than 19 times faster than 29 minutes. Lesotho’s Namakoe Nkhasi went one better than his third in Cape Town and his smile bore testimony to a huge personal best. His 27: 52 is a Lesotho national record and improved his previous best in Cape Town by 36 seconds.

And numbers three and four were equally impressive. Kenyan Asbel Rutto and South African Maxime Chaumeton both broke through the magical 28-minute barrier, posting significant personal best times, with Chaumeton getting early reward, two days before his 22nd birthday.  His 27:58 is the fastest time ever recorded by a South African on local soil and just 20 seconds outside Stephen Mokoka’s national record set in Manchester, England.

Kipkemboi dropped Rutto shortly after the first kilometre and was never threatened, racing away to a fine victory and leaving Rutto and Nkhasi to fight out the remaining podium places. Chaumeton and Mbuleli Mathanga raced stride for stride for much of the race before the former’s strong finish saw him overhaul Kenyan Isaac Kibet to claim fourth.

“This was a very big surprise for me,” admitted a delighted Nkhasi. “I’m happy and would like to thank my coach Michael Seme (Sponge) for training and everything he has done to improve my racing performance to achieve the Lesotho national record.”

“I kept on thinking I was catching, Isaac but he never got any closer!” confessed Rutto. “He was definitely a bit faster than me today. But I’m very happy.  I just wanted to run faster than my 28:28 PB set in Cape Town and it’s great to get under 28 minutes.”

“Maxime did very well,” said Chaumeton’s coach, South African distance-running legend Hendrick Ramaala. “It was all planned. He was in good shape and pushed hard to hit the target.  We will now focus his training to qualify for the Olympics over 1500m and 5000m.”

While the women’s contest was not as competitive, Chelangat impressed, as she raced clear from the start, tucking in behind her designated pacer, South African distance athlete Gladwin Mzazi. “I expected to run that time,” Chelangat said. “I was going for Stella’s record, and I’m pleased at the big improvement I achieved since last month in Cape Town”.

Lebo Phalula impressed with 32:59 for fourth place. The 38-year-old has been racing at elite level for twenty years and was only 30 seconds off her life-best set eight years ago, after having steadily regained her best form in the last months.

The man behind the series, Stillwater’s CEO Michael Meyer, was well-pleased with the weekend’s outcomes. “It’s amazing to see thousands of smiling faces at the end of the race and to celebrate after the tough time that Durbanites have been through recently,” said Meyer.

“We want to encourage mass participation across South Africa, but it’s also important to have top athletes to inspire,” Meyer continued. “Jesca Chelangat’s run today provide inspiration – she is now in the world’s top ten and will be in demand.  I hope we will be able to afford to bring her back next year!”

Meyer also recognised the improvement of South African distance running in recent years. “The depth of performance is very satisfying,” Meyer reflected. “This will be a strong message to the world. Not many 10km races can boast four athletes faster than 28 minutes.

“For us this was a great day,” said Absa Managing Executive for Relationship Banking, Keketso Motsoane. “Last year was good, but we bettered that today. We aim to be a force for good through running. So yesterday we had a big clean-up in the City, a walk in the park and we’ve brought people back into the city centre.

“The people of Durban have been hard hit for the past two years and the spirit is a low,” Motsoane continued. “We want to bring back the happiness for them through running. And every runner who competed today contributed to one of five charities and some of these funds will help those in need following recent floods.

“We’re in for the next four years and we would like to see the event getting event better each year.”