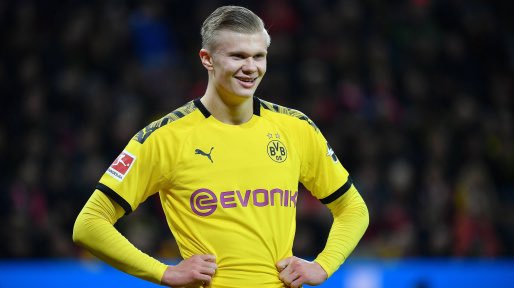 Borussia Dortmund attacker, Erling Haaland is set to make a return to action after suffering a knee injury on May 26.

The Norwegian striker is expected to be included in the squad for Saturday’s trip to Fortuna Dusseldorf as the Bundesliga enters the home-strait. Haaland injured his knee in the title clash against champions, Bayern Munich at Signal Iduna Park after awkwardly bumping into referee Tobias Stieler before getting substituted soon after.

BVB have been without two of their attacking stars in recent weeks as they look to secure Champions League qualification in the Bundesliga. Marco Reus is also back in training after a lengthy injury layoff.

Haaland, who has scored 10 goals in 11 Bundesliga games since joining the club in January, has been out of action since hobbling out of the 1-0 defeat to Bayern Munich that all but ended second-placed Dortmund’s title bid on May 26.

Reus, meanwhile, last played at the start of February as a thigh strain robbed Dortmund of their captain, who had been enjoying a fine individual campaign. The 31-year-old had contributed 12 goals and seven assists to BVB’s cause in 26 appearances across all competitions before sustaining the injury during a 3-2 defeat against Werder Bremen.

The skipper is still not quite ready to feature again but has at least stepped up his recovery, while Haaland’s knee problem is seemingly now behind him as explained by the club’s manager, Lucien Favre.
“[Haaland] has been training again since Wednesday and has been involved in everything. He looks very good,” Favre told a news conference on Thursday.
“Otherwise, everyone else who was available last week is okay.
“Marco started training with the team this week. We’re happy that he is training again and we all hope that he can play again as soon as possible.
“Unfortunately, I cannot give a more precise forecast yet. He will train again on Friday.”

Dortmund have softened the blow of losing Haaland and Reus in recent weeks by turning in improved defensive showings. Despite losing to Bayern last month, BVB have conceded just three goals in their past nine league matches – including a hard-fought 1-0 win over Hertha Berlin last time out. Favre’s men are now four points clear of third-placed RB Leipzig with four fixtures remaining, with Borussia Monchengladbach and Bayer Leverkusen both three points further back in fourth and fifth.

German Bundesliga may resume on May 9

Sammy Wejinya - April 12, 2020
Germany's top flight, the Bundesliga may resume on 9 May according to German Daily, Bild. Bild reports that the...
Bundesliga

Sammy Wejinya - May 30, 2020
Bayern Munich turned on the style to dismantle Fortuna Düsseldorf 5-0 and go ten points clear in...
Bundesliga