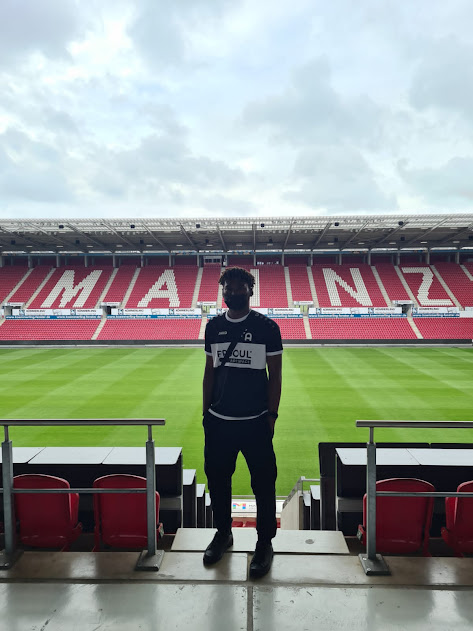 LAST MONTH FSV MAINZ 05 WAS ABLE TO PROOF THE SUSTAINABILITY OF THEIR INTERNATIONAL ACTIVATIONS ONE MORE TIME. WITH THE 21 YEAR OLD MANUCHIM OGUNDU THE FIRST PARTICIPANT OF THE CLUBS ACTIVITIES IN NIGERIA LANDED IN GERMANY FOR ONE WEEK TO LEARN MORE ABOUT THE CLUB, THEIR PHILOSOPHY AND HAD THE CHANCE TO WORK ON HIS STRENGHTS.

From the Frankfurt International Airport, he went straight to the famous academy of Mainz 05 where some of the greatest talents in Germany are being developed. Ridle Baku, a player with African heritage who recently won the European Cup with Germanys U21, is just one of latest examples.

During the week in Mainz including a tour through the MEWA Arena he learned even more about the history and philosophy of Mainz 05 and had also the chance to tryout with the first team of TuS Koblenz. “I am grateful to be part of the Mainz 05 program in Nigeria and having this unbelievable experience.“ At the end of the week, Manuchim received feedback from Pascal Stolarczyk (U11 Head Coach of Mainz 05), who personally watched numerous sessions at TuS Koblenz. Stolarczyk was one of the 05 coaches who digitally trained the talents in Nigeria beginning of the year.

Manuchim Ogundu participated in the 05er Soccer-School training programs with Vandyke FC in Port Harcourt launched in 2019, imbibing some of the rudiments of the Mainz training philosophy along with over 200 Kids.

Vandyke FC ‘s International Director, Gift Enyadike “We are very happy with the development and progress of Manuchim Ogundu who came into the program in Nigeria with his talented younger Brothers, Daniel Ogundu and Uzoma Ogundu.

“Manuchim is one of the most gifted Kids to pass through the Mainz program in Nigeria and a very talented and disciplined who has imbibed good education and character values. We are very proud that he is the first player of this program who travelled to Germany and Mainz 05.“

Vandyke FC programs with Mainz have been held in Nigeria in April 2019 in Lagos, Port Harcourt in August and September 2019 and extended to Lagos with Partners, Vandrezzer FC in April 2021 with the launch of the Digital Talent day and Mees Palace Academy in Jos, Nigeria in May 2021