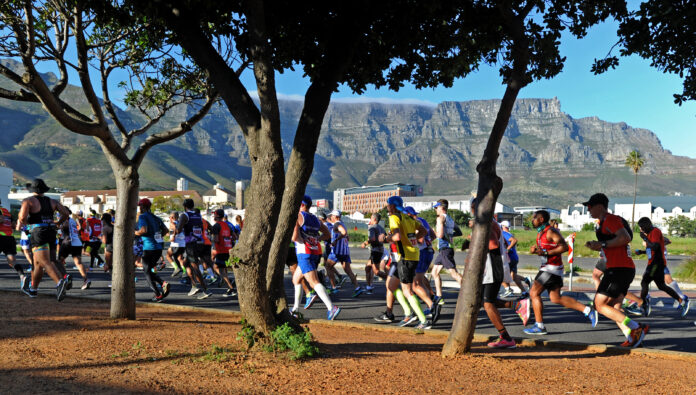 With just eighty days to go before the Sanlam Cape Town Marathon, the pieces of the puzzle are coming together with two significant announcements concerning the race made at the 80-day launch at a City hotel this week (Thursday 28 July).

As an Abbott World Marathon Majors Candidate race, Cape Town is waiting in the wings to join the select big-city marathons such as London, New York and Berlin. Much of the ‘tweaking’ of an already successful event as Africa’s sole World Athletics gold-label marathon is with a view to gain full marks through the World Marathon Majors assessment period.

Adjustments to the marathon route have been made to enhance the event still further and smooth over a few remaining challenging sections, while a bold step forward has been made which will ensure Cape Town retains its status as world-leader in marathon environmental sustainability.

A close partnership between the Sanlam Cape Town Marathon team (which included specialist transportation input) and the City of Cape Town’s Event Compliance Committee has resulted in a formula which has gained provisional nods of approval from significant players, including representatives from the World Marathon Majors.

“This is an important milestone and one of the major hurdles we have had to cross,” said a clearly elated Clark Gardner, Group CEO of Faces. “It took significant time and planning to create a detailed route mitigation plan in conjunction with professional traffic engineers to ensure that our impact on public access and Cape Town’s traffic remains minimal. We are grateful for the City’s positive collaboration and support and are fired up to continue with our race planning and communication over the next eleven weeks.”

New and improved start and finish precincts, unprecedented views over the city and Table Mountain from the new route on the elevated freeway, re-arrangements of city-centre routing and the elimination of the controversial bridge over Buitengracht Street late in the marathon are features of the route changes.

“We will be moving the start from Fritz Sonnenberg Road to Helen Suzman Boulevard to ensure a wide-road corridor for the early kilometres in the manner of the world’s leading city marathons,” explained Gardner. “Turning onto Buitengracht, the route will then follow the elevated freeway and Nelson Mandela Boulevard before dropping down to the old route along the Main Road via Searle Street.”

With a few modifications, the route from Victoria Road, Woodstock, remains similar to that which has served the race well in previous years, crossing the railway line over Stanhope Bridge in Claremont before returning to the city centre via Rondebosch Common, Liesbeek Parkway and Lower Main Road. Thereafter the route through South Africa’s oldest city centre includes some challenging features for the elite athletes while navigating past some of the city’s most important heritage features.

“Some marathons are simply fast and flat, where fastest possible times are the sole criteria,” Van Zyl continued. “Berlin and Chicago Marathons fall into this category. Others, such as New York and Boston, provide opportunities for fast times but also show off the city and include features which require careful tactical planning and preparation.

“These features provide significant spectator and media interest and can often determine the outcome of the race. The climb over Heartbreak Hill in the Boston Marathon, reached after 32km, is one such example.

“In Cape Town we have two climbs shortly after 30km – one up Hannover Street and Vogelgezang into the heart of District Six and one a gradual ascent up Plein, St Johns, Hatfield and Orange Streets to the top of Long Street.  These climbs could become defining points in the race for those who have added strength to speed in their training programmes.”

There is little doubt that the new route will favour those who have enough in the tank after 33km to take advantage of the long descent down Cape Town’s historic Long Street and the fast stretch to Queen’s Beach shortly after Sea Point Pavilion, before the return along Beach Road and the fast finish in Helen Suzman Boulevard.

The Sanlam Cape Town Marathon has been at the forefront of environmental consciousness and sustainability has always played an important part in the planning and presentation of the event. As the first city marathon to declare itself ‘carbon-neutral’, Cape Town has set a trend for other leading world marathons to follow and the announcement at the 80-day launch that the 2022 edition of the marathon will be free of single-use plastic at the water-points represents a bold step forward.

Over the years, the event has spear-headed various green event initiatives, ranging from event waste recycling to supporting charities focusing on sustainable environmental interventions. Promoting a “carry-your-own” initiative in recent years by having water refill stations in place for participants wanting to run waste-free was an initial step towards eliminating plastic sachets, which has now been achieved.

“The elimination of sachets from the race has always been our long-term aim and we are pleased that we have now taken this step, in conjunction with our partner, Peninsula Beverages,” said Sanlam Cape Town Marathon race director, Renee Jordaan.

“Water, Coca-Cola and Powerade will be dispensed into wax-lined paper cups – which will be recycled separately – while athletes who prefer to run with hydration packs, bottles or cups will still have access to refill facilities at approximately 3km intervals along the route.  And we will be continuing with our efforts to protect water bodies by covering all drains along the route with netting.”

Technical sponsor, adidas, has been on a sustainability journey for the past two decades and adidas brand manager for sport, Lisa Ehlers, was on hand at the launch to underline that commitment. “Our goal is to become a more sustainable company, and we have a clear roadmap to achieve climate neutrality across our entire value chain by 2050.

“One of the company’s core commitments is to end plastic waste, and the decision to eliminate plastic sachets from the race is in line with this commitment. Much of adidas’ product range, including the official race T-shirt and the stylish Cape Town Marathon jacket, is made using recycled materials.”

Big events, such as the Sanlam Cape Town Marathon, play a significant role in the economy of the city, as Alderman JP Smith, Mayoral Committee Member for Safety and Security recognised.  “The City of Cape Town is pleased to continue its partnership with the Sanlam Cape Town Marathon and we are thrilled by the event’s growth over the years,” Smith said. “Having an Abbott World Marathon Majors race in our city would be like having a World Cup every year and that would mean more job opportunities, more international exposure, more tourism and more economic prosperity for our city.”

Sanlam’s Head of Brand, Mariska Oosthuizen dedicated this year’s race to celebrating everything that can be achieved by working together. “When Sanlam started this sponsorship eight years ago, we knew we were working towards major status,” Oosthizen continued. “By uniting champions in all forms, this dream will be realised for our continent and its incredible people, and that is certainly something worth celebrating.

“This year’s theme ‘African Champions Unite’ is perfectly in synergy with Sanlam’s mission to be an African champion that fosters continent-wide financial inclusion. We want to empower generations of Africans to be financially confident, secure and prosperous. This race shines a spotlight on Africa and our people’s immense talent. It perfectly aligns with our goal to amplify confidence across the continent and to work together to achieve big things.”