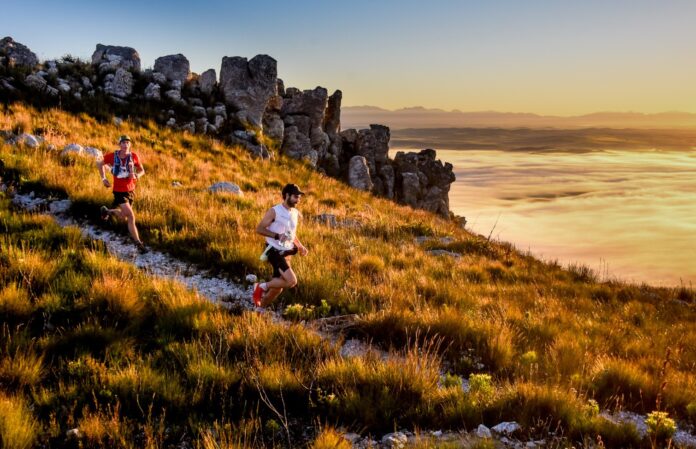 After a three-year hiatus, South Africa’s trail runners once again are heading south this weekend (30 July) to De Hoop Nature Reserve at the southern-most region of the continent to compete in the seventh and biggest edition of the Merrell Whale of Trail, racing the popular 53km five-day hiking trail in just hours.

Declared a world heritage site in 2004 De Hoop Nature Reserve, managed by CapeNature, is a global biodiversity hotspot of plants, animals and birds, and visitors to De Hoop can enjoy rich terrestrial, wetland and marine life in and around the 16km-long Ramsar-status lake, the iconic coastline between De Hoop Vlei and the mouth of the Breede River and the distinctive Potberg mountains in the east.

A colony of Cape Vultures resident high in these mountains might be spectators for the first half of the race as the trail traverses spectacular fynbos-covered mountain peaks and valleys before southern right whales and bottlenose dolphins keep a watch on the action as runners follow limestone-cliffs and sandy shores along the coastline between Noetsie at half way and the finish at Koppie Alleen.

Johardt van Heerden and Toni McCann swept to record victories at the Merrell Whale of Trail in 2019 – the last time the race was run before COVID intervened. McCann is currently enjoying a successful season in Europe running as part of the adidas TERREX team, but Van Heerden returns to defend his title, just two weeks after placing second in the 50km Dodo Trail race in Mauritius.

“I’m feeling excited to be heading back to Whale of Trail,” said Van Heerden. “The goal is simply to go out there and enjoy it as much as possible – it is such a beautiful route. I tried as much as possible to recover well after the Dodo Trail and I think I am well recovered. It is going to be a fun race but I’m looking forward to taking off a bit of time afterwards before my build up to Otter.”

But Van Heerden might not have matters his own way, and he could find himself up against stiff competition from his coach, Christiaan Greyling, and his stable-mate, Joshua Chigome, on his quest for another title. Greyling will feel he has unfinished business at ‘The Whale’ after his second place behind Rory Scheffer in 2017 and third behind Kane Reilly and Bernard Rukadza a year later.

Incredibly Greyling’s finish times were almost identical – just seconds separating his two 5 hrs 6 min finishes. This year he has at least half an eye on the clock. “My training has gone well, and I am hoping to run a sub-five-hour time for the first time ever!” Greyling said yesterday.

Who does he see as his most serious competition on the weekend?  “I’m mostly worried about the athletes I prepared for the race, Johardt van Heerden and Joshua Chigome,” Greyling continued. “They are in excellent shape! So it’s a win-win for me, because if I don’t podium, both these guys will!!”

Rukadza will be aiming for another podium finish, but the talented Zimbabwean-born athlete, now into his 40s, will have to his work cut-out against athletes little more than half his age. Another ‘elder statesman’ of the Merrell Whale of Trail, 39-year-old Southern Cape athlete Melikhaya Msizi, will be aiming to break his string of 4th place finishes with a podium position and a stake in the attractive prize money on offer, courtesy of PSG Wealth.

In McCann’s absence and with other recent Whale winners Meg Mackenzie (2018) and Nicolette Griffioen (2017) also missing this year, a new champion will be crowned in the women’s competition with anyone of several strong trail athletes in contention. The two top finishers in the recent George Mountain Ultra-Trail 42km, Landie Greyling and Kerry-Anne Marshall, however, are favoured to take the higher podium positions tomorrow.

Greyling placed second to Griffioen in 2017 and is back to her best form following some years out of top competition while starting a family. “I feel strong and completely recovered from COVID but am feeling exhausted from life and kids!” Greyling admitted.

Marshall, a gold-medallist in the Comrades and Two Oceans Marathons, and past Ultra-trail Cape Town 100km winner, is also on the post-family come-back trail but has had to shrug off the effects of illness following her second-place at George. “I’m feeling fine now, but short on training miles,” Marshall admitted. “I plan to focus on my nutrition, start conservatively and hope to finish strongly. I’m just going to run and embrace it. I’ve never done it before as it has always clashed with Comrades Marathon but I’ve always wanted to run it.”

Ultra-trail Drakensberg 100km champion, Jo Keppler from KZN, Eastern Cape athlete Nadia Jooste, 2018 Merrell Whale of Trail runner-up (and third in 2019) Karine Bezuidenhout, and the Western Cape pair Pippa Dickson and Kate Mapham are all likely to be at the front end of the contest in one of the strongest fields in the Merrell Whale of Trail’s history.