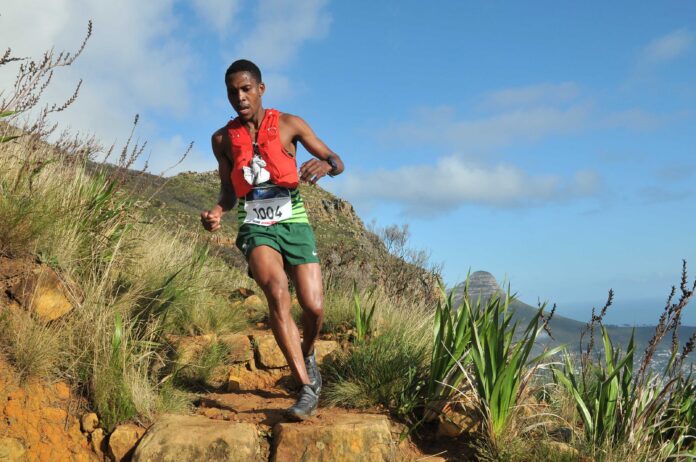 A feature of the event was the announcement that the top four Two Oceans Trail permanent numbers will be awarded to Landie Greyling (number 1 – for three wins), Kane Reilly (number 2 – for three wins), Dom Wills (number 3 – for completing ten trail races and pictured above in yesterday’s race) and Dave Bywater (number 4 – for completing ten trail races) at a special event in the near future.

A recent bout of COVID prevented Reilly from defending his title this year but the three-times champion, who is virtually unbeatable over the distance on Table Mountain trails and who leaves in two weeks to race in Europe, was on hand to congratulate Kanyimo as he crossed the line in 1 hr 58 min 40 sec – just three minutes off Reilly’s winning time on a different and slightly longer course, but similar in respect of total ascent and degree of difficulty.

“I loved the race and conditions were perfect,” said Kanyimo, winner of last month’s prestigious Fedhealth Platinum 24km Trail Race in Gauteng. “I ran with some of the other guys in the beginning, but felt I needed to push on after a few kilometres and I managed to open a lead.

“I come from a road-running background but got into trail to avoid the many leg injuries you get on the road. So now I love trails more than the road. But I need to take your mountain back home so I can train on the hills – in Pretoria and Johannesburg we have nothing!”

The ‘social running’ which saw a lead group of four running together in the early stages quickly ended as Kanyimo made his intentions clear at the start of the long climb into the heart of Newlands Forest just over 3.5km into the race. At the top of the climb, the Gauteng visitor was 16 seconds clear of Special Editions 25km and Old Fisherman’s Trail 24km winner, Kyle Bucklow, with Oi Morris a further 8 seconds back in third.

Five kilometres of forest trails later and the gap over Bucklow had grown to a minute, as Kanyimo ran strongly up to the start of the Woodcutters Trail. Leiberich had opened a similar margin in the women’s race, with Van Niekerk 52 seconds back in second. Jo Haw was running comfortably in third, six minutes behind Van Niekerk.

Bucklow’s strength on the climb and knowledge of the course saw him close the gap on Kanyimo on the testing climb to the top of Newlands Ravine and closed further on his rival on the technical descent to the Middle Traverse.

“I was feeling good on the climb and descent and also was closing the gap on the contour trail around to the Kings Block House,” Bucklow reflected. “But once we approached the jeep tracks back down into Newlands Forest I knew I wouldn’t catch him – he was simply too fast.”

The final fast kilometres played to Kanyimo’s road running strength and he raced home 63 seconds ahead of Bucklow with Morris running a strong second half to claim third in 2:03:03.

Van Niekerk used her speed on the descent to close the gap on Leiberich after the strong-climbing German had reached the Saddle in pole position.  Van Niekerk took the lead along Middle Traverse, running strongly to the finish to cross the line in 2:26:42 – twelve minutes inside Peek’s winning time in 2019.

“Marion is such a strong climber so I knew she would beat me to the top of Newlands Ravine,” said Van Niekerk.  But I felt good in the second half and am pleased to have won today.”

Leiberich, who has been struggling with a foot injury, held on to take second place, 3 min 45 sec back, with Haw clinching the final podium position.

The closest contest of the day came in the 13km race, where Nkombi and Jacques du Plessis matched each other stride for stride in the final kilometres before Nkombi’s finishing sprint proved decisive.  He crossed the finish line at the Imhoff Sports Grounds in Newlands in 56:34 to win by three seconds.

37-year-old Franchhoek-based Uys, who returned to racing in February following the birth of her child, won in more relaxed fashion, her 1:22:04 winning time over six minutes clear of Joanne Burns.