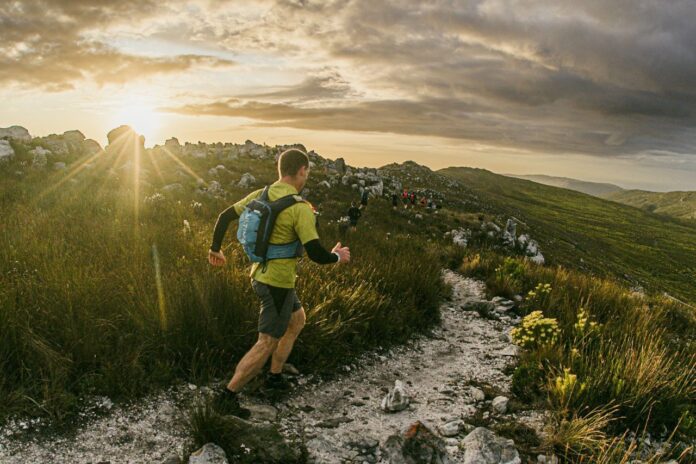 Leading South African trail athletes, Johardt van Heerden and Landie Greyling, were victorious at De Hoop Nature Reserve over the weekend, living up to their pre-race favourite status with convincing victories at the Merrell Whale of Trail over 53km.

Van Heerden won in 4 hours 41 min 2 sec – 11 minutes off his own record achieved in 2019 and 18 minutes ahead of a fast-finishing Joshua Chigome in second place.  Greyling’s win in 5:50:25 was nine minutes off her time in 2017 when she placed second to Nicolette Griffioen and 22 minutes outside Toni McCann’s 2019 race record, and the Stellenbosch athlete was pushed all the way by Cape Town physiotherapist, Kerry-Anne Marshall, who crossed the finish line at Koppie Alleen just two minutes in arrears.

Runners came from all over South Africa to compete at De Hoop and the global biodiversity hotspot did not disappoint with Cape vultures spotted on the mountains at Potberg and southern right whales and dolphins plentiful off the coastline.

Light rain overnight kept conditions cool and ideal for trail running, although the feared headwind against athletes along the coastline in the final quarter made its presence felt, adding to the discomfort of the athletes, already exhausted after 40km of tough trail exertion.

Van Heerden successfully defended his title won in 2019 in the last pre-COVID edition of the race, while Greyling improved on her runners-up place to Nicolette Griffioen in 2017 to add the Whale of Trail title to her impressive running CV.

Neither athlete rated their victories among their best, however. “I guess with four races out of the last five weeks it was not surprising that my body felt tired and unresponsive,” admitted Van Heerden, who is now planning some much-needed rest before starting his preparations for the Otter African Trail Run in October.

Greyling echoed his sentiments. “I’ve enjoyed some good training, but had a tough week coming into the race and my legs felt heavy,” Greyling confessed. “When I tried to increase my pace, my body complained so I just concentrated on keeping my pace constant, the sea on my left and Kerry-Anne behind me!”

But ultimately it was mission accomplished for Van Heerden and Greyling, who came away with the win they were seeking and the ‘pot of gold’ at the end of the Whale of Trail rainbow. The R30 000 first prize on offer makes it one of the richest trail races in the country.

“To be honest, the money does make a difference,” Van Heerden said. “This makes the hard work worthwhile and it’s great when there’s a decent reward at the end of a race.  It will help to pay off some of our expenses from our recent trip to Europe.

“The Whale of Trail is a great event with good food, a nice vibe and a unique opportunity to run on a prestigious hiking trail. But it is also one of the more expensive races, especially with the cost of travel, and it’s nice they are giving something back to the runners.”

Van Heerden and Greyling both raced clear of their rivals from the start, conscious of the need to get an early lead to defend later in the race. “My legs were not as springy and happy as I’d hoped they would be,” admitted Greyling.

“All week I’d been feeling run down and heavy.  I felt if I ran together with Kerry-Anne, as we did at George, I would likely have lost concentration and she would have won in end. So I thought it best to get an early gap and try to hold on. I could see her quite often throughout the race – that kept me going!”

The two champions moved smoothly through the initial mountain section, but not too quickly to miss out on the stunning landscapes at sunrise. “The views were magnificent,” Van Heerden said. “Although the cloud meant it was not as spectacular as three years ago, we could still see the sunrise.”

Van Heerden made a swift transition through the second checkpoint  at 22km at the end of the mountain section and was almost ten minutes clear of Eastern Cape athlete, Mvuyisi Gcogco in second place. Cape Town athletes Joshua Chigome and 2018 runner-up Bernard Rukadza followed close behind in joint third.

Greyling had also established a lead, but hers was parsimonious in comparison. Marshall arrived at the checkpoint less than a minute in arrears with Qqeberha athlete, Nadia Jooste, close behind in third.

“Landie was ahead of us on mountains,” said Marshall. “But I could always see her ahead of me on the trail and she was not far ahead at the second check point.  I’d been told to save my legs for the coastal section, so I ran cautiously on the descents. I struggled to refill my water bottles there and Landie got away from me.  Nadia joined me at the aid station, and we took off together towards the coast.”

As the leading women were leaving the second checkpoint, Van Heerden had already reached passed through Noetsie on the shoreline, 27km into the race. Still running strongly, Van Heerden had grown his lead to 13 minutes over Gcogco and Rukadza with Chigome a further two minutes back in fourth.

Greyling ran through the Noetsie checkpoint in 2:58:58, but Comrades and Two Oceans Marathon gold medallist, Marshall, was just 54 seconds behind. Jooste was 1:30 back in third with KZN’s Ultra-trail Drakensberg 100 mile champion, Jo Keppler, fourth another three minutes back.

“I felt in control,” said Greyling, “but whenever I tried to push further away from Kerry-Anne, my legs and body said ‘no’!  So I just maintained my pace, knowing that my conditioning was there.”

Marshall was grateful for being within sight of Greyling on trails unknown to her. “I was running on my own and not quite sure of the route, but fortunately I could see Landie ahead which helped me with navigation! I found the coastal stretch challenging – it was quite technical for me and I struggled to get into a rhythm.”

Van Heerden scarcely skipped a beat over the craggy limestone cliffs and onto the beach section, reaching the fourth checkpoint at Lekkerwater (38km) with a massive 27-minute lead over Chigome, who was running strongly and had moved up two positions. But Van Heerden’s heavy racing schedule started to take effect forcing the leader into ‘maintenance mode’ – concentrating hard on his own running and focusing only on the way forward.

Chigome was now flying and took almost seven minutes out of Van Heerden’s lead in the 8km between Lekkerwater and the final checkpoint at Vaalkrans at 46km and another two minutes in the final 7km to the finish.  But the gap was too big, and the result was never in doubt as Van Heerden raced across the line to clinch the title.

“I felt good through to Lekkerwater and a bit beyond,” said Van Heerden. “I knew I had a significant lead so although the going started to get tough it was just a question of consolidation. The head wind didn’t help and I’m sure the sand was softer and more challenging than it was three years ago!  All in all, I’m happy about getting it done. It’s not my best but also not my worst performance.”

Chigome continues to improve with each race and he became only the fifth athlete to dip under the five-hour barrier at the Whale of Trail with his runner-up position in 4:59:39. Gcogco completed the podium eight minutes later with Rukadza taking the veterans’ title in fourth overall.

Van Heerden was philosophical about running 11 minutes outside his 2019 time. “It gets hard to psyche yourself up for another race – mental fatigue takes a lot out of you. Normally I don’t race too much – I always place quality ahead of quantity but these last few weeks have been an exception. Also, in 2019 Kane (Reilly) and myself pushed each other for 40km, whereas today I was running on own from the start.”

Marshall was just a minute behind Greyling at Vaalkrans – the final checkpoint 7km from home – but she tired over the tough final stretch, crossing the line two minutes down in a solid 5:52:36. “I loved it – it was so beautiful,” said Marshall. “I loved the mountain section but the whole trail is so beautiful. I felt so blessed out there.”

Jooste (6:05:31) took third with a strong-finishing Kate Mapham moving up to fourth in 6:16:25 in a carbon-copy of last month’s George Mountain Ultra-trail 42km.