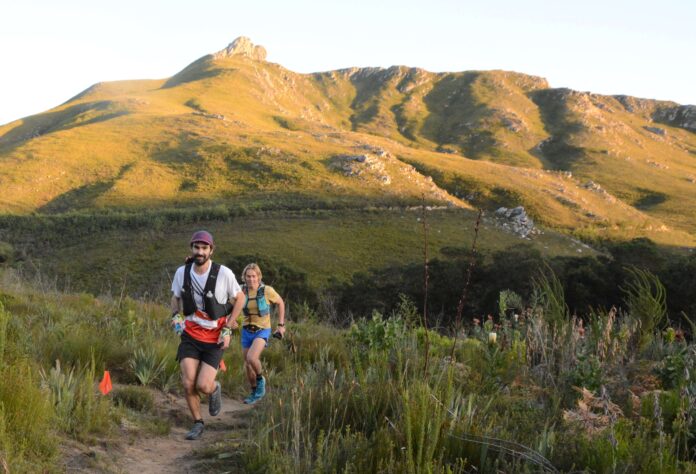 Brand-new father, Kane Reilly, delivered the performance of the day with a superb solo-effort record-breaking win in the Discovery George Mountain Ultra Trail 60km this weekend which saw four records broken and two inaugural champions crowned in a trail-running extravaganza in the Southern Cape city this weekend (Saturday 18 June).

When Reilly is on song, there are few in the country capable of stopping him and none did as the father for four-week old Finn raced to victory in 6 hours 11 min 22 sec – 7 minutes inside the record he established last year.

Almost 1000 runners participated in five superbly-organised races comprising the fifth Discovery George Mountain Ultra Trail event in and around the George mountains over distances ranging from entry-level 10km to a stamina-sapping 100km.

A recent bout of COVID notwithstanding, experienced Stellenbosch athlete, Landie Greyling, continued to show that her best trail years lie ahead with a convincing win over close rivals Kerry-Anne Marshall and Nadia Jooste in the George MUT Marathon over 42km, her 5:09:38 over 20 minutes inside her winning time last year. Former Gauteng athlete, Iain Peterkin, now resident in Cape Town, outlasted his rivals to win the men’s race in 4:29:17.

Fifty-one-year-old Southern Cape resident, Bruce Arnett, continued to show that age is just a number with an impressive 32 minute victory over fellow-local, Brandon Hulley, in 12:40:59 in the inaugural 100km race, which had its participants gasping with both delight at the scenic vistas and pain at the severity of the test of running. Stellenbosch physiotherapist, Tarrin van Niekerk, was equally impressive in winning the women’s title, placing fifth overall in 14:35:50, fifty minutes ahead of George athlete Lodelia Odendaal.

“I love running in these mountains – it’s a special place for trail running,” said Reilly, who led from start to finish. “I felt good for much of the race, but the last section was quite tiring. Overall, I’m in better shape than I was last year, so I’m pleased to have got the record ahead of my return to the Ultra-trail Mont Blanc CCC 100km in August.”

George athlete, Roelof Mostert, did well to keep Reilly in his (torch) sights in the pre-dawn ascent of Cradock Pass and was just 12 seconds in arrears as the athletes raced through the top of the pass at 10km.  But Reilly stepped up the pace as the sun’s rays touched the mountain peaks and although Eastern Cape athlete, Mvuyisi Gcogco, moved into second place in the second half, there was no catching Reilly who raced away to a forty-minute win.

A feature of the marathon-distance event was the head-to-head contest between two former Ultra-trail Cape Town 100km winners, Landie Greyling and Kerry-Anne Marshall, both on the comeback trail and seeking to regain their best form, Greyling after being hit by a bout of COVID following a superb run at Ultra-trail Drakensberg 60km in April.

The appearance of Gqeberha athlete, Nadia Jooste, at the front of the field after the climb up Cradock Pass was something of a surprise but was short-lived as the two Western Cape athletes took over at the helm soon after. With cramps slowing Marshall in the latter stages, it was the strong-running of Greyling which proved decisive in her four minute victory. Jooste was a further eight minutes back in third.

“It’s good to feel that I’m over COVID,” said Greyling. “I’m still not at my best, so took it conservatively in the early stages. My legs just wouldn’t get going up Cradock Pass and felt really heavy. It was great to run much of the way with Kerry-Anne and fortunately just before 20km the legs kicked in and I was able to enjoy the second half, finishing strongly.

“I only made a late decision to run after (her husband) Christiaan’s parents agreed to come and baby-sit so we could both run. It was a really a race to test my conditioning and training ahead of the UTMB OCC 56km run in August in France.”

Marshall has her sights on the end-of-year Ultra-trail Cape Town 100 miler and although she struggled towards the end, she was pleased with her progression and the opportunity to embrace key learning points which tested her ability this weekend.

“I had a good race up to about 32km,” said Marshall. “But then cramps hit me hard. Also, I had a fall and generally struggled in the last 10km. But what amazing mountains to run in – this place is incredible! After we caught Nadia, Landie and I took turns to set the pace, giving each other time in front.

“We both started conservatively, running side by side, chatting, until suddenly I started to cramp. Landie maintained her pace and gradually I saw less of her. But what a great day out. There was a lovely vibe – it was competitive but super fun to be with Landie and Nadia.”

Former Pretoria athlete and part-time running coach, 34-year-old Iain Peterkin, moved to the Cape at the beginning of 2021 and enjoyed re-connecting with his old Gauteng trail running mate, defending champion, Jacques Buys, during the race before he took control in the second half, racing to an eight-minute win over Christiaan Greyling in 4:29:17.

“We hadn’t seen each other for a while and spent the first half of the race catching up as we shared the lead up and over Cradock Pass,” Peterkin reflected. The duo raced through the North Aid Feed Station 40 seconds up on Greyling, who always threatened to challenge the lead but was never able to do so.

“The route opens right after George Dam – it was a nice runable section and I was in front at that stage. I heard he had dropped behind somewhere before the dam,” Peterkin continued.”

The race ultimately came down to who could best manage cramps which plagued the leading trio, with Buys suffering the most, dropping back and out of the podium positions. “I was okay after reaching George Dam but I really struggled on the switchbacks in the last 12km,” admitted Peterkin. “I cramped each time I tripped on a root and had to stop to stretch out the muscle. Fortunately, I recovered when we hit the jeep-track 3km from the finish.”

Arnett has been a fixture in long trail races in Africa for many years and shows no sign of calling a halt to his successful career after adding the Discovery MUT title to his already impressive running CV. “Not too bad but some really tough sections,” was the verdict of Arnett, the only athlete to finish in under 13 hours. “Running Tonnelbos (in the final 10km) on 100 km legs is a bugger! Otherwise, I felt strong and I’m super-stoked to have won.

“Robbie Rorich was almost on me approaching Tierkop at 40km, but I think he pushed a bit hard to catch me and seemed to tire after that. There’s just so many great parts of the race – I particularly enjoyed the ‘Pass to Pass’ section (at 10km) and running down to Tierkop and Dizzy Heights.”

Fast-rising local star, Rebecca Kohne, had a rare off-day in the ‘downhill’ MUT Challenge 25km, battling with her nutritional intake and leaving the way open for Cape Town athlete, Lijan van Niekerk, to race clear in the second half to take line honours in 2:27:09, almost eight minutes ahead of Kohne.

“Fortunately, I felt better than last week (when Van Niekerk won the 24km Old Fisherman’s Trail Challenge),” said Van Niekerk. “I think I’m finally shaking off the effects of COVID. Rebecca was strong on the climbs and she took a lead on the first ascent (at the top of Outeniqua Pass), but I was able to catch her on the descent after 3km. Then she closed on me on the next climb and so it went on. Fortunately, there was more downhill than up, which favoured me today.”

Experienced athlete, Rohan Kennedy, and Christie Els won the respective MUT Lite 10km titles, both within the previous records. Kennedy won comfortably in 51:29 while Els held off Micala Chevalier by just 13 seconds in winning in 1:11:15.