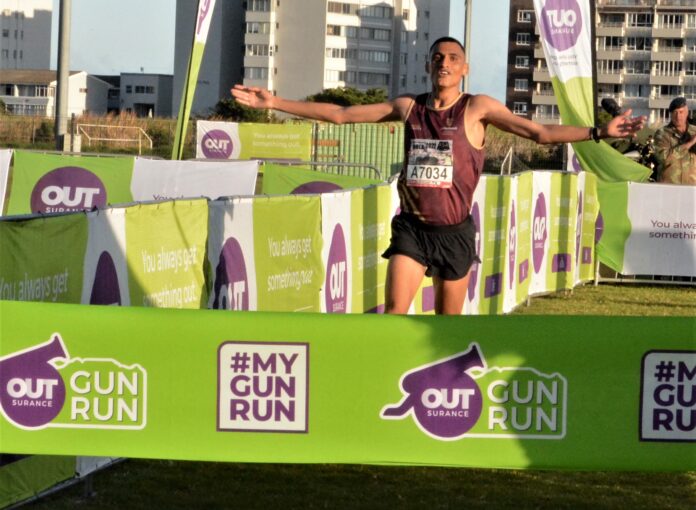 Ashley Smith and Fortunate Chidzivo were crowned king and queen of the OUTsurance Gun Run Half Marathon at Green Point this morning (Sunday 18 September) as Cape Town-based athletes regained the thrones from their inland rivals in the 28th edition of the popular road race. Gauteng-based Olympians Desmond Mokgobu and Gerda Steyn were relegated to close second places.

Zimbabwe-born Chidzivo, running in the colours of Retail Capital Langa, was the first Cape-based female to win since Tanith Maxwell took line honours in 2013 when she crossed the line on the Green Point Common in 1:14:16 to win by 38 seconds.

Gauteng-based athletes came out ‘all guns blazing’ in the OUTsurance Gun Run 10km, with another Olympian, Precious Mashele, gaining his third OUTsurance victory with an impressive 10 second win over Eastern Cape athlete, Melikhaya Frans. Mashele’s winning time of 28:35 was just 24 seconds off his lifetime best.

And 38-year-old Johannesburg athlete Lebo-Diana Phalula was in a class of her own, winning the women’s competition in 34:54, more than two minutes clear of her Cape Town rivals and runners-up Anel Terblanche and Nolene Conrad, who for several reasons were not able to produce their best performances on the day.

More than 12 000 runners entered to take part in the five events which made up the OUTsurance Gun Run over the weekend, taking advantage of the perfect running conditions to enjoy a great day out along the western sea-board, celebrating the return of the Gun Run following a two-year COVID-enforced absence.

“Phew!  The half-marathon is tough,” admitted Smith. “Those last 5km were murder!  But I’d prepared well for the race, averaging 173km per week for twelve weeks leading up to the race, aimed at building my strength for the 3000m steeplechase and qualifying for the 2024 Paris Olympics.

“I knew I was up against two Olympians (Mokgobu and Sibusiso Nzima) with 60- 61 minute half marathon best times, but felt that if I could stay with them till the final kilometre, my track speed would prove decisive.”  And so it proved, as Smith burst past the 2019 winner, Mokgobu, just 200 metres from the finish to take the title.

Smith led from the start, running to a pre-determined pace, leaving his rivals to step up the speed to catch him. “He ran the race of his life,” third-placed Nzima admitted. “He ran his own race and we were forced to run at 2 min 55 sec pace to catch him. I never thought he would be so fit.

“Our pace was fast – at times it felt like we would break the course record (Joel Mmone’s 62:31), but the last kilometre seemed very long. But I’m happy with my race – it was ideal preparation for next month’s Cape Town Marathon.”

Mokgobu gave it everything, initiating the chase to catch Smith and pulling the Murray & Roberts pair, Nzima and Philani Buthelezi, to join him and Smith in the four-strong lead pack at halfway.  Mokgobu threw in several surges as the athletes reached the Sea Point Promenade, dropping Nzima and then Smith in what appeared to be a dash to victory. But Smith clawed back to draw level with Mokgubo 3km from home before racing clear to win by 9 seconds.

Like Smith, Chidzivo went ahead from the start, but unlike Smith she was able to stay clear of her rivals to win in 1:14:26. Although Steyn’s strong finish closed the gap on her rival in the final kilometres, she ran out of real estate and was forced to take second place, 38 seconds in arrears. Another Zimbabwe-born athlete, Rutendo Nyahora, made it a husband and wife third-placed double following her husband Nzima’s podium success, crossing the line in 1:18:37.

“When I heard that Gerda had entered I thought, shoo, there goes the money!” Chidzivo joked. “So I was pleased with the win and my preparation for a year-end marathon.  I knew I was not in PB shape, but I was aiming for a sub-74 minute time, so my time’s a bit disappointing.  I found the hills and the paved promenade very tough. I’m more of a smooth and flat runner!”

Like Chidzivo, Steyn was using the Gun Run as marathon preparation and was delighted with her run ahead of the New York City Marathon in November. “I had planned to run an average of 3 min 27 sec per kilometre and that’s what I achieved,” said Steyn, who carried a 160 km training week with her into the race. “I’m happy with my conditioning at this stage and I loved every minute of the race, particularly those places where we could see the runners coming from the other direction.”

Three athletes dipping under the 29-minute mark translated into an impressive outcome in the OUTsurance Gun Run 10km with KZN athlete, Reghen Magwai joining Mashele and Frans with his third-placed finish in 28:51 – 21 seconds clear of first Cape Town runner, Anthony Timoteus. “I’m very pleased with my win,” said Mashele. “I was able to break from Magwai and Frans after 7km and held on for victory.”

It proved an outstanding weekend for the race beneficiary, the Animal Welfare Society, who heard that the money raised by the athletes for the society had been doubled by the title sponsor and R103 044 will go to improve the care and medical attention of animals on the Cape Flats.

Pot of gold under the Otter African Trail rainbow

A Comrade has fallen